The aim was to produce highly accurate survey photos for street inventories and the assessment of street conditions. The data will also be used as the basis for traffic routing and control, pedestrian navigation systems and metropolitan and heavy transport management.

Introduction
The Berlin Senate administers the city’s traffic network. The requirements placed on a modern city administration make a systematic and uniform survey of the street and road network essential, in order to generate a digital twin of the network. The determining factors in selecting a methodology were time required, and measurement accuracy at the highest level.

The data had to correspond to the relevant guidelines as in “recommendations for maintenance management of inner city streets” and be input into the traffic management system. Apart from the challenge of working with 300 terabytes of data, and of producing accurate data, there was the added challenge of meeting the heterogeneous requirements of the Berlin administration. At the time, this was the largest and most complex project of its kind to have ever been carried out.

Purpose
The 12 administrative districts of Berlin should be in the position to have access to a centralised homogeneous data set for all districts using standardised software. 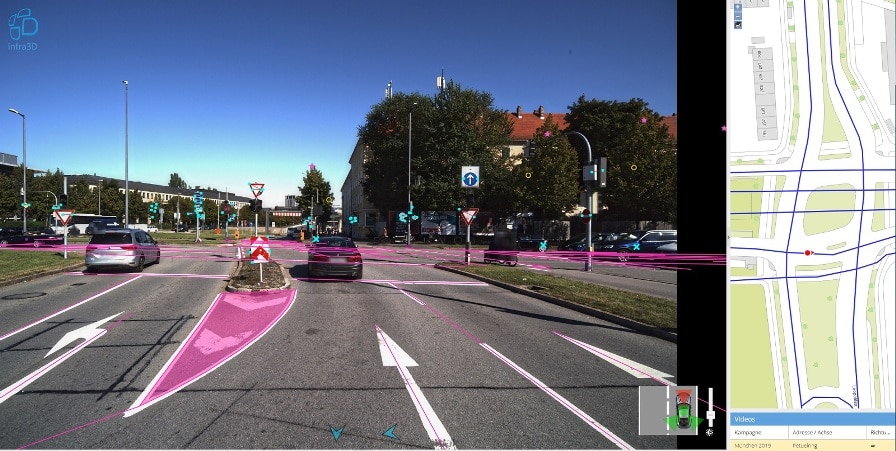 Specification
The street documentation should be produced using 3D mobile mapping. For this requirement, mobile survey technologies in the form of specially equipped vehicles were specified. The mobile survey was the prerequisite for mapping the required geo-information and features from the acquired data.

The data should represent the entire traffic system plane, fully, in length and breadth up to the leading edge of the adjacent structures.

Based on the data mapped the streets were sorted into categories according to current state and condition, which facilitates technically better maintenance planning and budgeting. The information about street furniture can be used for processing permits for special uses such as street cafes. 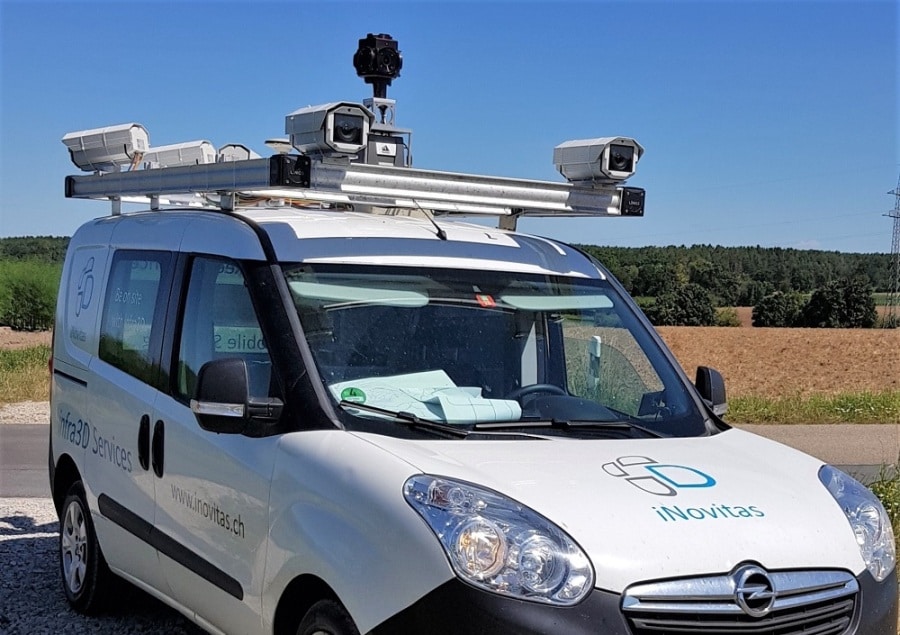 Implementation
The city administration has provided a node-edge-model, which follows the street axes and names. There was no such model for paths through parks and other such facilities; so Hansa Luftbild had to carry out this work in consultation with the city.

Whether the streets would be surveyed in one or two directions and whether those streets with more than three lanes would be surveyed more often was initially decided at the planning stage and then during the actual survey adjusted to requirements. The same applied to pedestrian paths, which were not visible from the road because of densely overgrown verges. Finally, all the data was mapped on the basis of the survey images alone; with no subsequent site visits.

The mobile survey lasted two summers. The client had previously defined unacceptable parameters for the image quality: shots when the sun is low and shadows long; images taken against the light; and images containing fallen autumn foliage, snow, ice and puddles.

Survey permits were issued before beginning the mobile survey. This is particularly important in the case of pedestrian paths. During the mobile survey, the navigator recorded construction sites, non-visible areas, and impassable sections of streets (barriers etc.) and gave the information to the client.

All data had to be geo-referenced with positional accuracy of ± 10cm and a relative height accuracy of ≤ 2cm for the minimum clearance outline. To achieve this the streets were mobile surveyed with vehicles equipped with three calibrated stereo camera systems and laser scanners. Apart from a data storage device, every vehicle was equipped with GPS, inertial navigation system, and an on-board computer.

Hansa Luftbild applied the infra3D technology of Swiss iNovitas for the capture process. The vehicles used by Hansa Luftbild are each equipped with a panorama camera, high resolution stereo camera systems one at the front, and two right and left at the back, as well as a 360° laser scanner.

The entire system captures 122 megapixel image data every 3 metres. The stereo camera pairs ensure highly accurate measurements and dense point coverage: the system can deliver 2,600 points to an area the size of an A4 sheet of paper and thus has 15 times the resolution of any other system. Photo 2a and 2b demonstrate differences in the density of measurable points between infra3D and laser technology.

In addition, the 360° laser scanner delivers a million points per second. At 40 km/h, a laser profile is created every 6 cm.

Prior to mapping the stereo images all the data was anonymised. Number plates and faces were blurred out. The vector data was delivered in Shapefile format, which can be input into the most common geo-information systems.

Accuracy
The absolute accuracy (in relation to the co-ordinate system) in the stereo images is 5 to 20 cm in plane and height, at a speed of 80 km/h, with unbroken reception of the navigation satellite signal. Because Berlin generally consists of densely built-up areas with high and low rise structures, as is the case in most large cities, the accuracy of the survey had to be improved with “advanced georeferencing”.

After processing, the data areas with reduced positional accuracy were filtered. Hansa Luftbild then incorporated terrestrial and aerial control points (5,000 in all) into these areas. This method required only half the points, which would have normally be used for improving accuracy in the plane. The image data was reprocessed and the remaining street sections further improved. For small planned areas, this densification of ground control points rendered an absolute accuracy of 1 cm.

Computerised Survey and Planning
All images and laser data captured during the mobile survey are displayed in uniform format in the infra3D Web-Client. This is a platform, which is far more than an image viewer. All the data is converted to single frames and for every 6 pixel/cm² the precise position and height information is calculated at a level of accuracy as described above.

This enables the features in the images to be measured to the same degree of accuracy as if a team had been sent to the field. Any user, including those without specialised knowledge, can carry out the measurement of features. The infra3D Web-Client can be accessed 24/7 from anywhere in the world and can be used while on the road for example to digitally sketch out planned projects. Multiple users can access the data simultaneously without the need to install special software; so decentralised data updates are also avoided. In the time of Corona the infra3D Web-Client is the perfect solution for those working from home. The streaming technology is tailored to distribute the massive amount of data for web-based use and set-up to also cater for narrow bandwidths.

The greatest advantage of the system, according to clients from Berlin and elsewhere, is that on-site inspections do not take place, and geo-data can be displayed in its exact location, thus saving time and money. Authorities and planners can also make use of the infra3D Service to visualise data during consultative sessions.

A client from the city of Ibbenbueren sums up saying: “Acceptance … is won by the infra3D Service through the provision of robust base data and the 3D visualisation.”

Perspectives
The mobile mapping approach used in Berlin can be applied in any city – large or small. It can also be used for both roads and motorways, and any part of the world. The technology can similarly be utilised for railways, harbours and navigable waterways.

In addition to the Berlin project requirements the technology has other applications:

Berlin will use the data for its pavement management program to enhance cost transparency for street maintenance. The data’s reproducibility and its revision-auditing facility ensure that administrative and technical authorities are legally secured.

At present, a mobile mapping project in Munich is using the imagery in the infra3D Web-Client to capture, for example, 140,000 trees as a basis for the oversight of traffic safety. The city of Vellmar is using survey images to make an inventory of streetlights and Vienna is using the infra3D Service to survey street advertising.

Infra3D Service can be integrated into WebGIS or its functionalities can be embedded in third party applications. So the mobile survey’s images and the capabilities associated with it can be accessed with familiar software.