The need for a fundamental understanding of geography is recognized by the Dutch educational system where administrators have established topography as part of the national curriculum for secondary school education. This requirement helps students learn about the dynamics that drive political power, international trade, industrialization, climate change, national alliances, and many other impacts related to geography. Dutch students are required to learn the locations of 300 specified cities, bodies of water, and mountain ranges throughout the world partly by GIS.

The locations are determined by CITO, an educational testing service in the Netherlands. Periodically, CITO revises these locations based on such things as emerging economic markets, natural disasters, and events with international impact. 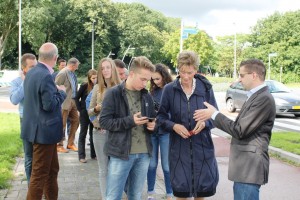 Adapting Arc GIS Online to Course Requirements
Dennis Hunink began teaching geography eight years ago at DevelsteinCollege in Zwijndrecht, a town located in the suburbs of the port city of Rotterdam. “Initially, I just used the same materials that my fellow geography teachers were using for my topography classes,” said Hunink. “After a few years, though, I began to wonder if there were better materials available on the web to help my students master the designated worldwide locations for their exams.”

He soon discovered that despite the vast resources available on the internet, he was unable to find the exact materials his students needed. 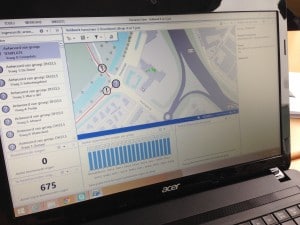 “I found some websites that provided good information, but they weren’t particularly easy for the students to use because the displayed maps were not the same as those they used in their exams. More importantly though, I found that the vast majority of the educational mapping materials available on the web lacked a real didactic vision, nor were they cartographically correct.”

Since Hunink had taken several courses on GIS and cartography while studying social geography at Utrecht University, he decided to explore the possibility of creating more appropriate web-based course materials for his students. He spoke with some experts in the field of geography education in the Netherlands and determined that there was a need for an integrated method to teach topography that was not being met by the commercial publishers of educational materials. 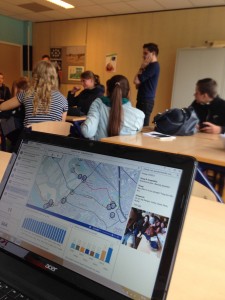 “I have some web development skills and thought it would be useful for my students if I created a website that allowed them to easily find the materials they needed for my topography course and prepare for their examination,” said Hunink. ”I got in contact with Esri Nederland and they were enthusiastic about my project. They provided me with an ArcGIS Online Organization account, which allowed me to use the available APIs to develop the maps for the class and server space for file storage.”

After several months work, Hunink released, “Topografie in de Klas” (https://topografieindeklas.nl/) in January 2012. The program is driven by the ArcGIS JavaScript API and uses Arc GIS Online hosted content to provide an interactive experience for the students in their topography coursework. Students pick specific features, such as rivers or cities and then engage in a series of questions about them. Results are reviewed by the instructor online and all materials can be saved by the student for future reference. Students can also share their results with friends via Facebook. 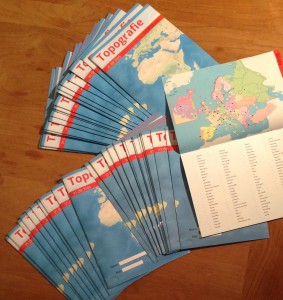 By the end of 2012, more than 100 schools were using the Topografie in de Klas website, which is about 15% of all secondary schools in the Netherlands. Today, more than half of the students taking topography classes use the website for their work.

Hunink indicates that it is difficult to say with absolute certainty that Topografie in de Klas has increased learning outcomes, however he has a wealth of antidotal evidence that indicates this is the preferred method to study topography by his students.

“I found indications suggesting that the website makes a positive impact on the students’ work,” says Hunink. “But more importantly, the students keep telling me that learning topography is much more effective and supportive using the website. Many of them became very frustrated when they had to learn the course materials with low-quality printed maps and some even felt like giving up.” 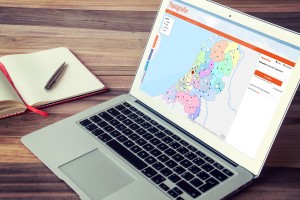 Taking ArcGIS Online into the Field
With the success of using Arc GIS Online for Topografie in de Klas, Hunink began to explore options for his students to use it in the field as well. “I had been using the Collector app with ArcGIS Online for 2-3 years in my classes, but wanted to set up a formal program that could be used by other teachers,” said Hunink.

In early 2015, he completed Veldwerk 2.0, a program that uses Collector for ArcGIS to get students more engaged in their required fieldwork exercises. Once students load the specified map into the Collector for ArcGIS smartphone app they go into the field and answer all the questions displayed on their map. They can do so with or without an internet connection, thanks to the offline modus featured in the smartphone app. Like Topografie in de Klas, Veldwerk 2.0 provides a digital version of an existing course requirement in Dutch schools. 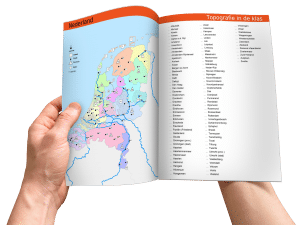 “Implementing GIS this way works well in our educational system here in the Netherlands,” says Hunink. “The teachers are familiar with the existing coursework and it is an easy step for them to use digital maps rather than printed ones. They don’t feel intimidated by a GIS program. Hopefully, by building their confidence in this way, both the teachers and students will begin to create their own content with ArcGIS Online.”

To expand the use of Veldwerk 2.0, Hunink and Esri Nederland began to collaborate. Hunink teaches the Veldwerk 2.0 workshops in a classroom provided by Esri N

ederland. The company also publicizes the workshops as an official course. Today, approximately 40 teachers from 20 different schools have completed the workshop and are using Veldwerk 2.0 in their classes. 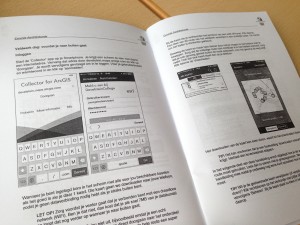 “We started this project with Dennis during the spring of 2015,” said Dene Mastwijk, part of the educational team at Esri Nederland. “We host Veldwerk 2.0 workshops throughout the year, so that teachers can learn how to use ArcGIS Online and implement it into their students’ fieldwork exercises. After a teacher has completed the workshop, their school receives free access to their own ArcGIS Online Organization Account for a year.”

On a recent visit to DevelsteinCollege, Alida Oppers, Director-General of Primary and Secondary Education, part of the Ministry in the Netherlands, was given a demonstration of Veldwerk 2.0 by Hunink’s students. “This is a great example how innovative technology can be used in education,” was Oppers observation. “It makes classwork more visual and allows students to experiment. This type of education is effective because the students remember the lessons much better and they get the opportunity to reinforce their lessons outside of the classroom.”