The Past Is Here 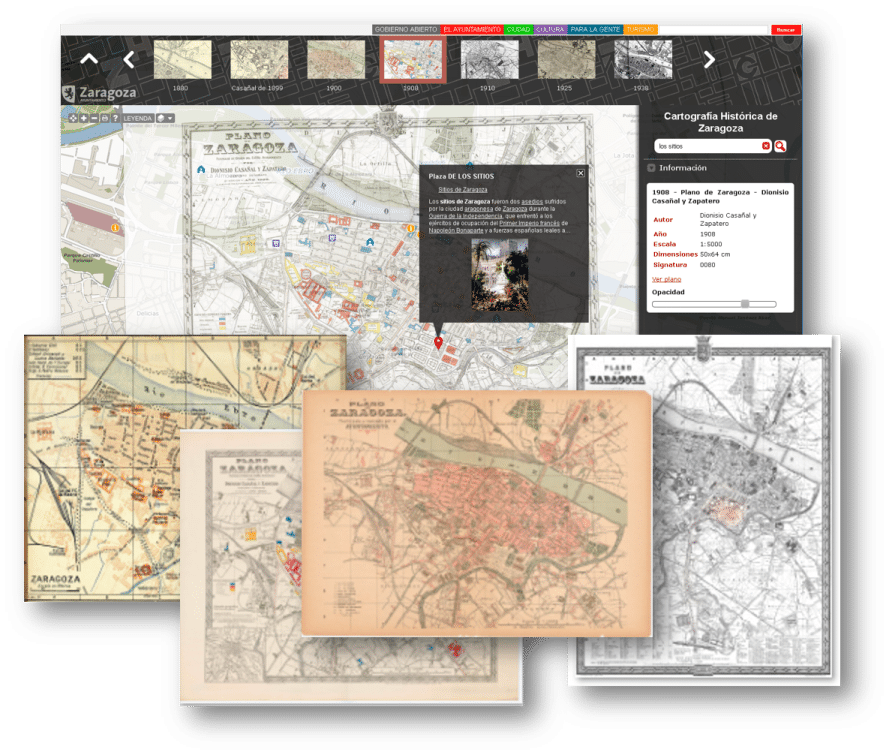 Introduction
We are result of our own history, and this can be clearly seen in the way human settlements in general (and cities in particular) evolve over time. The historical archives of different public administrations have the originals of the shape and perceived visions of our cities across time, represented in maps of great historic and artistic value. In some cases, these material resources have been preserved and safeguarded for many years and have served as a basis for very different, interesting and needed research works. It is not until a few years ago when the interest of its use and dissemination to the general citizens has been generated.

A Web Viewer for Historical Maps
The Advanced Information Systems Lab in collaboration with GeoSLab the Office of Participation, Transparency and Open Government of the City Council of Zaragoza and the Municipal Archive, and within the European project ENERGIC OD, has worked in the line of digitally publishing historical plans based on Spatial Data Infrastructures. The result is reflected in a new web application, “Zaragoza Histórica”, integrated the portal of the Spatial Data Infrastructure of the City of Zaragoza . 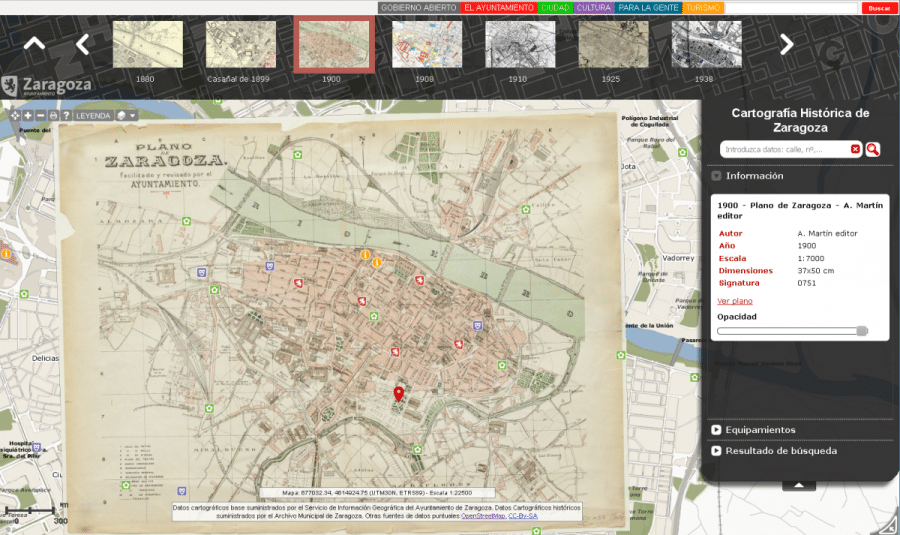 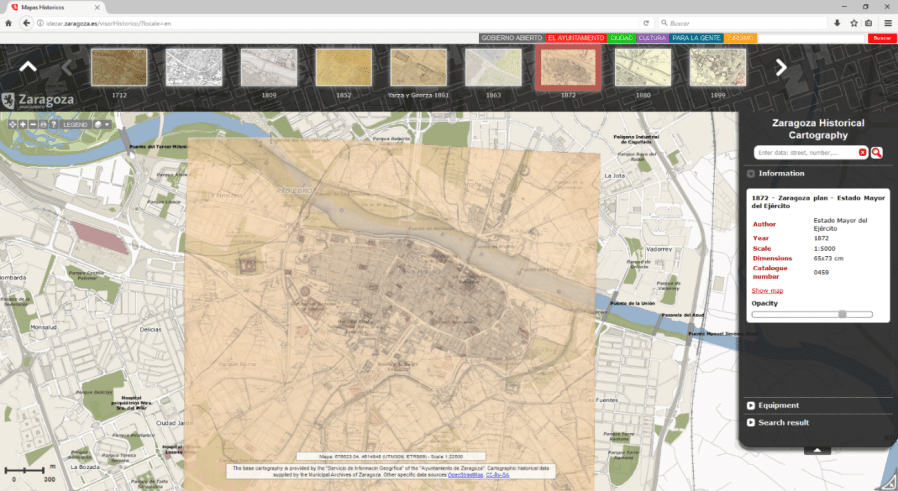 Zaragoza Histórica provides Zaragoza citizens and tourists with a web visualisation tool that combines current cartography with a selection of historical maps from Municipal Archive of Zaragoza.  So far, a collection composed by 19 maps of XVIII, XIX, XX and XXI centuries has been published. Users can select any of the maps and browse them individually by performing the usual actions of zooming in and out, panning, etc. Users are also able to compare any of them with the current cartography by overlapping the maps and setting a transparency level. Each of these maps is provided with detailed information about them (year, author, dimensions, etc.) and a link to the full metadata record in the Municipal Archive.

Digitisation
The state of historical cartography in its original media (paper), like in the case of any other type of physical document, degrades over time, even with optimal storage and handling conditions when used. A solution to contribute to its preservation is the digitization of this material. This way, besides the original document (of course still to be preserved), there are digital copies that can be consulted without any type of restrictions caused by the need of preservation of the original. These copies must be carefully done, with much respect to the original media. In many cases, specific infrastructures are needed (like large tables, high resolution cameras, tripods, illumination sets, etc.) and high resolution and detail is required so that the digital copy can replace the original document for as many queries as possible.

The Zaragoza Council was already offering many digitised historical documents as open data, with several historical maps among them. The format in which these maps were initially offered (raster files in DjVu format) limited their reuse and exploitation. DjVu is an open file format designed primarily to store scanned documents, very suitable for archiving and long term preservation of digitalised documents but it is not widespread and it does not allow for its contents (maps in our case), to be georeferenced. In order to be used in the Zaragoza Histórica application, the Council made a selection of 19 of these maps, ranging from 1712 to 2004, which were digitised by the Archive in a more common format (GeoTIFF) and with a higher resolution, needed for allowing zooming in the maps. Due to this the size of each map is much bigger than it was initially expected.

Georeferenciation
These digital maps cannot be used directly in any GIS application, as they must be georeferenced first. Transformation to a target coordinate system is the main goal of georeferencing the historical maps. In many cases, map projection, central meridian, scale distortion, survey technique used for the realization of the original historical map are unknown or uncertain, so its georeferenciation is usually performed by finding identical points both in the historical map and in reference data sets, and applying an appropriate transformation method to the historical map. Additionally, the portrait and orientation presented in historical maps is sometimes strange to us because it is outside the patterns we are used to: The North upside, the South downwards and the origin of coordinates in the Equator and the Greenwich meridian. As an example, even nowadays, many maps of Seville have the North pointing to the left and maps of Barcelona usually are slightly rotated to accommodate the perfectly orthogonal streets of the Exiample with the vertical and horizontal axis of the map.

So, the assignment of current coordinates to singular points of historical maps leads in many cases to rotations and distortions in the map that must be treated with great care by the software helping in these operations. In the Zaragoza case, 21 singular points were selected as fixed ground control points (GCPs) and were used in all the maps in the collection. The selected points are current points of interest (POIs) in the city that have not changed throughout the years, as uniformly distributed on the map as possible, like, for instance, the corners of the cathedral or the ancient Muslim palace.

The digitised maps were georeferenced with open-source software (QGIS with the ‘Georeferencer GDAL’ plugin) using the thin plate spline (TPS) algorithm. This algorithm is appropriate when the maps to be georeferenced present large deformations with respect to the current cartography, as it was the case with the historical maps. It introduces local deformations in the data, but the relative positions of GCPs remain unchanged. As the selected GCPs correspond to current POIs, this will allow to exploit these POIs future developments of the application. 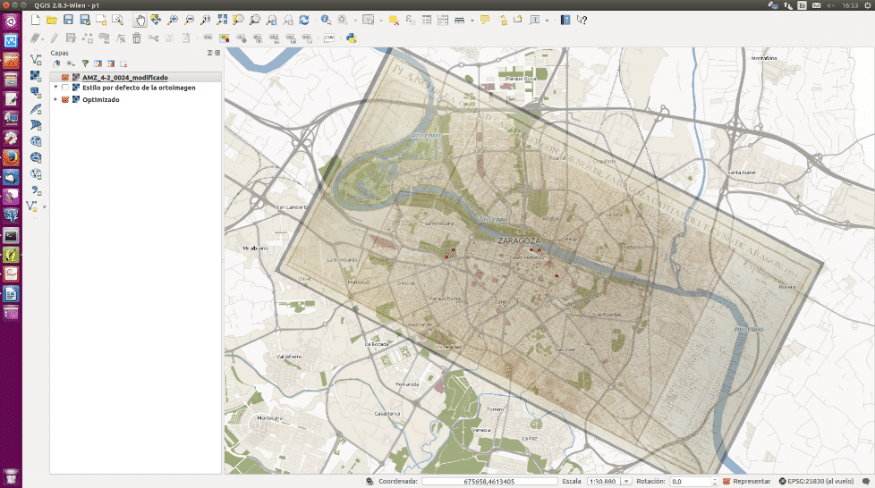 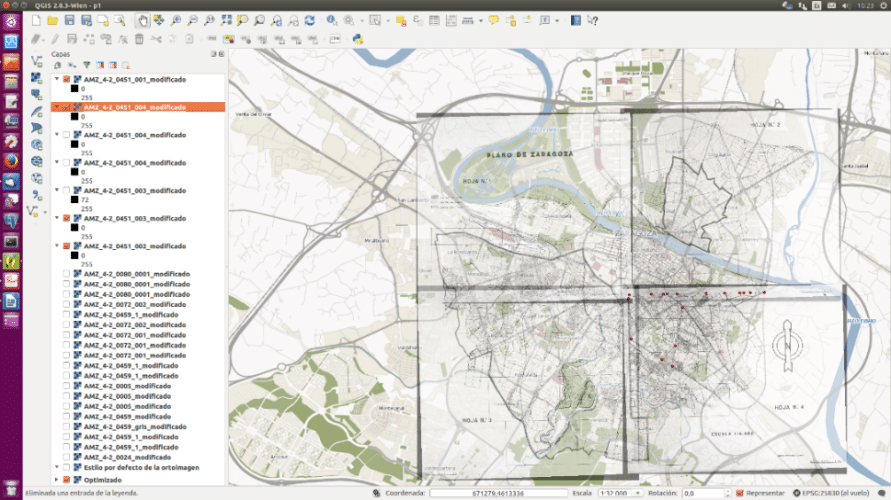 Information on the transformation accuracy of the georeferenced maps was recorded. In particular, averaged error (AE) was calculated for a subset of the collection as the differences between a new set of manually selected control points on georeferenced maps in comparison with reference data sets. Maps belonging to the XVII and early XIX century presented an average error significantly larger (between 15,4 and 31,3 m) with respect to the average of the XX and XXI centuries (around 8 m).

Publication
The georeferenced maps were finally published as Open Data through an OGC service offered by the ENERGIC OD’s Virtual Hub: the VH provides a Web Map Service interface while internally performs the access to the original data (the historical maps GeoTIFF files) and manages all the cache operations. The WMS allowed, on the one hand, to reduce the development effort of the web front-end of Zaragoza Histórica while, on the other, facilitates the reusability of these data by third parties in the potential development of other applications. Initially, the Web Map Tile Service (WMTS) was the selected interface, due to the fact that reduces bandwidth use and load times. However, after conducting performance tests with a WMS interface, we concluded that the response times were appropriate enough for an interactive application, so it was finally chosen as the access interface.

The Zaragoza Histórica web application is actually composed of two different elements: the map viewer container and the viewer itself. The container, based in jQuery technology (jQuery 1.8 + JQueryUI10), interacts with the map viewer using the façade pattern and implements most of the interface offered to the user, including all the ways to select the data to visualize over the map and advanced functionality such as toponym search. The map viewer is implemented with a proprietary library developed by Universidad de Zaragoza and based in the Open Source framework OpenLayers 2.12. It provides access to the base cartography and gives all the tools to navigate through the map. By default, it only offers a plain map and the functionality to draw different kinds of data over it in a dynamic way. This feature is used by the container to request and display all the special geographic data made available to the end user.

Future
Several options are considered in order to enrich the application in the future. One of them would be the functionality to portray simultaneously two different historical maps side by side for easily comparing them. Both panels could be synchronized, reacting in the same way to zooming or panning actions from the user. 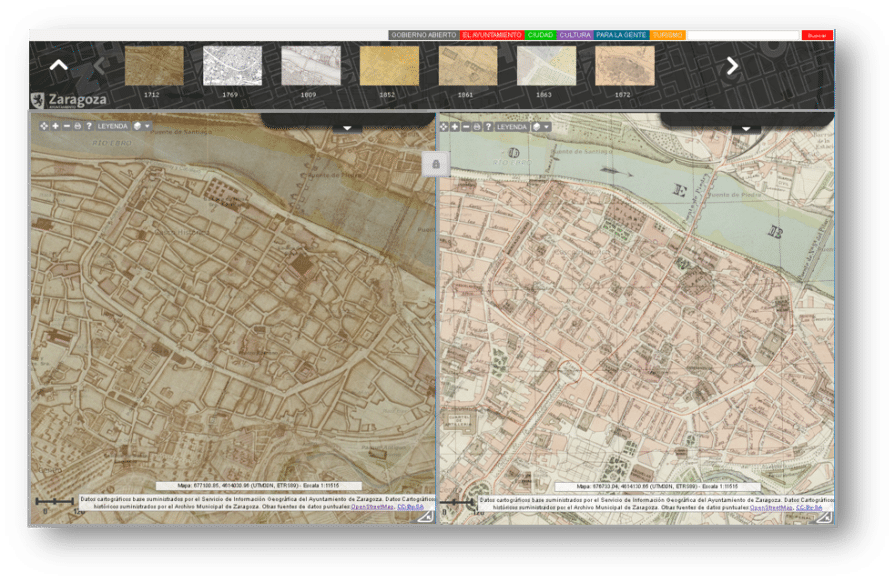 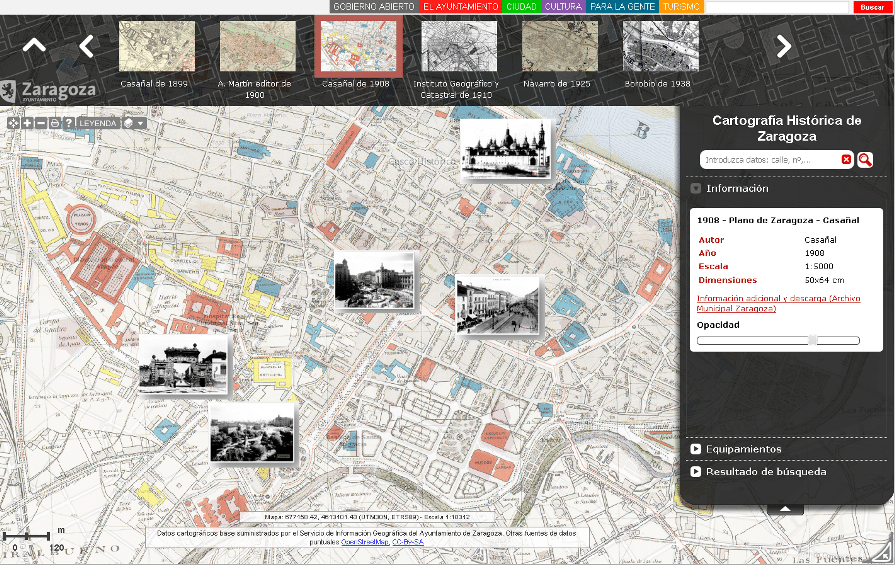 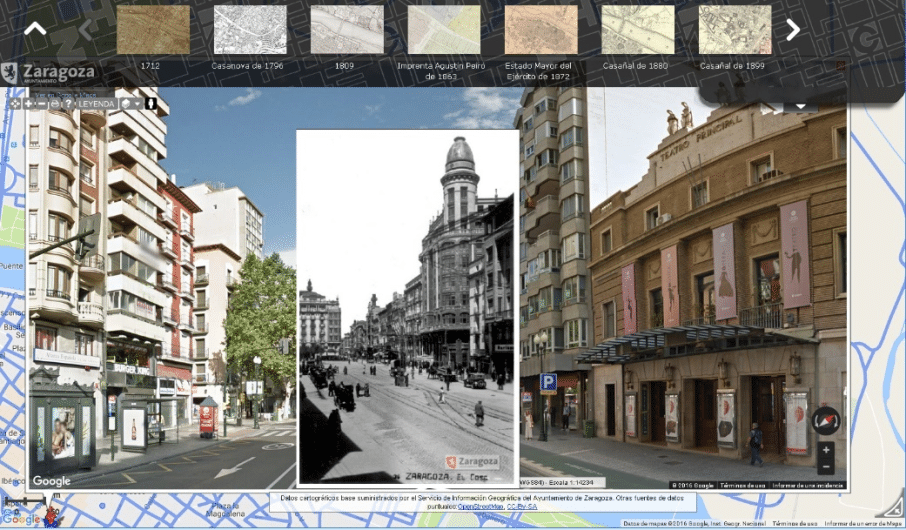 Additionally, the concept of Zaragoza Histórica application can be easily replicated in other areas, provided the availability of several large-scale historical maps and customised to the corporate image of the archive providing the maps or organisation managing the application. 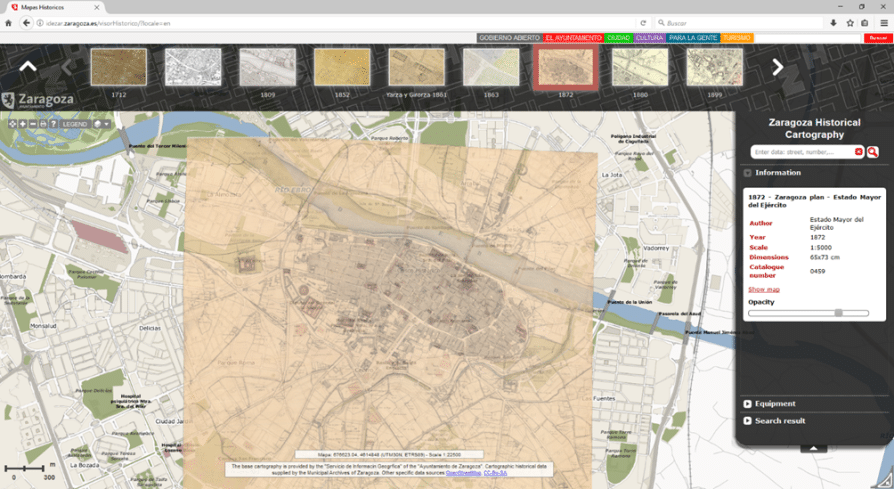 Acknowledgements
Authors want to thank the Office of Participation, Transparency and Open Government of the City Council of Zaragoza and the Municipal Archive and the Gicarus Lab from the Politecnico de Milano (POLIMI).

The research leading to the results of this paper was partially funded under the ICT Policy Support Programme (ICT PSP) as part of the Competitiveness and Innovation Framework Programme by the European Community (CIP) GA no. 620400.