2019 predictions for the Commercial Drone Industry

2018 proved to be a big year for the commercial drone industry as a whole, as it saw the launch of the UAS Integration Pilot Program (IPP) from the FAA, new products like the Phantom 4 RTK from DJI and major developments for a new European regulatory framework for drones, but those are just a few of the highlights. They’re part of the reason that 2019 is set to be even bigger for the industry, as major developments with regulation, fleet management and numerous other topics have been predicted to come together in a big way 2019.

To get a better specific sense of what 2019 has in store for the commercial drone industry, we connected with Mariah Scott, President at Skyward, A Verizon company. Under her leadership, Skyward has helped enterprises realize the enormous potential of drones, which has given her incredible insight around what 2019 has in store for organizations looking to adopt the technology as well as the drone industry as a whole.

Jeremiah Karpowicz: There are lots of “big picture” market predictions out there in terms of the potential value of drone technology, but what do you think we’ll see in 2019 when it comes to connected fleets of autonomous vehicles? 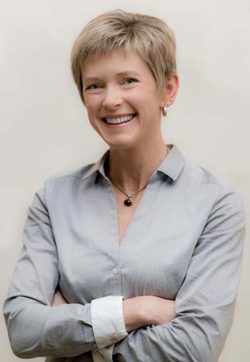 Mariah Scott: 2019 will be the year of the autonomous drone. What will that look like? We’ll see private companies and public agencies dispatch autonomous drones together with existing networked fleets of ground and aerial vehicles for data-gathering and yes, delivery. Operators will be able to fly a drone from anywhere in the world with network-connected ground control stations (GCS), and data will be transmitted back via a network-connected GCS or even a connected drone.

We’ll see public agencies use connected fleets of ambulances, fire trucks, helicopters, and drones for natural disaster response, unfolding emergencies, and search-and-detect applications. We’ll see drones integrated into smart cities as an essential part of the infrastructure for inspections, asset management, data services, delivery, and more. Private companies will integrate cargo planes, freight trucks, and drones for incredibly efficient delivery. We’ll come to expect that news organizations will provide live coverage of emerging events with both drones and ground cameras. And the fact that they do this will no longer be newsworthy.

These integrated networks will be managed and delivered by public agencies and companies rather than rolled out on a nationwide level, but they’ll serve as smaller scale proofs-of-concept for the grand vision—a global system of safe, connected, efficient, autonomous drones. We’ll also see regulatory and technological innovations that will bring us closer to that goal.

Part 107 has opened up tremendous opportunities for operations and organizations of all types, but regulation is still the number one issue that people ask about. Given Skyward’s ability to provide commercial drone pilots with instant access to controlled airspace using the new Low Altitude Authorization and Notification Capability (LAANC), what can you tell us developments we might see for remote IDs & waiver integration with LAANC in 2019?

The phrase “regulatory innovation” doesn’t tend to elicit excitement—but when it comes to drones, new regulations have catalyzed market growth and spurred innovation. Just look at Part 107 and LAANC, two regulatory advancements that drastically increased drone adoption and expanded use cases throughout the United States. This year, the FAA will enact regulations that will bring us closer to a unified, connected, global system of manned and unmanned vehicles.

For 2019, I predict that the FAA will implement a requirement for remote identification for all drones, recreational and commercial, flying in the U.S. This is a foundational element of the bigger, more audacious universal traffic management (UTM) project that will enable the most interesting and life-changing drone use cases, from package delivery to aerial taxi services. In order to manage air traffic, pilots, operators, and regulators have to know precisely which vehicles are in the air at any given time. Implementing remote ID will mark a moment when UTM moves out of R&D and becomes something that is actually happening. Globally, we’ll see the foundation of a global registry of pilot registration and identification that, like remote ID, will be another foundational element of a global UTM network.

Closer to home, we’ll see the FAA integrate Part 107 waivers with LAANC access. This development in particular would be great news for Skyward customers. Today, if a company has a daylight waiver that allows them to fly at night, it cannot be used in conjunction with LAANC access. A company can choose to fly either at night or in controlled airspace, not both—even if they have proven equivalent levels of safety. Now would be an ideal time for the FAA to enable LAANC-waiver integration for qualifying operators.

Lastly, the question of “build or outsource” is one of the bigger topics of discussion when it comes to how an enterprise wants to leverage drone technology. Any predictions around whether or not we’ll see larger companies bring drone programs in-house in 2019?

I predict that we’ll see a groundswell of companies bringing drone programs in-house. We’ve seen companies begin to move away from third-party aerial service providers over the past two years as companies have seen how easy it is to adopt drone technology, train pilots, and achieve ROI. At Skyward, we recently commissioned the first double-blind study of drone use among medium and large U.S. companies through an independent research firm. The study found that 88% of these companies see ROI from drones in a year or less. That’s significant, especially among earlier adopters, and we can expect many more large companies to follow suit. The study also found that only 20% of companies are outsourcing flight services.

In 2019, we’ll see more consolidation among both flight services providers and the startups that have primarily served those providers. These include data processing platforms, asset management software, and even aircraft manufacturers.

Recommendation: Pay attention to your software providers and other vendors. If they are startups that primarily serve small companies or other startups, it’s likely we’ll see them try to shift focus in the coming 12 months.

Jeremiah Karpowicz always envisioned a career as a screenwriter, but found the autonomy and freedom he was looking for in the digital space. He has created articles, videos, newsletters, ebooks and plenty more for various communities as a contributor and editor. He has also worked as the Executive Editor for ProVideo Coalition where he was first introduced to UAV technology. You can get in touch with him on Twitter: @jeremiahkarp