Schiphol Airport in The Netherlands is a busy airport and getting busier. With nearly a half million commercial air flight movements in 2018, it ranks as Europe’s third busiest airport in passenger volume. 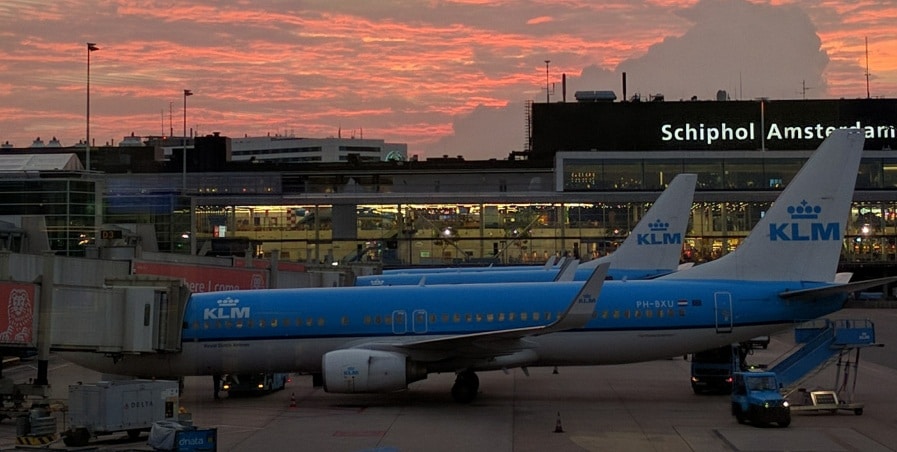 Impressive. But not so impressive if you’re a geodata firm conducting aerial surveys. Enter Geospatial services company BSF Swissphoto, specializing in air-traffic challenges. Since 2016, BSF has successfully delivered on an annual aerial photo campaign north of the airport.

“Roughly 85 planes are landing or taking off at Schiphol every hour, so flight control is incredibly strict,” says Sandra Beckmann, a project leader with BSF Swissphoto’s German office in Schönefeld. “When we are given a flight window, we have to be ready to go at a moment’s notice and we can’t afford any mistakes in collecting our photos because it puts meeting our delivery deadline at risk. It’s an added level of complexity in a project that’s already challenging.”

On top of that, the firm deals with weather delays, air traffic restrictions and unforgiving technical specifications and deadlines. They’ve had to produce homogenous, seamless orthomosaics with a ground sample distance (GSD) of 4 cm for a 900-square-kilometer area of interest (AOI)––about the size of Madrid––in 11 weeks. However, Beckmann and her team have successfully demonstrated that a smart flight plan and robust and efficient photogrammetry software are the right combination to navigate and land a complicated aerial survey and secure a route to repeat flights in the future. 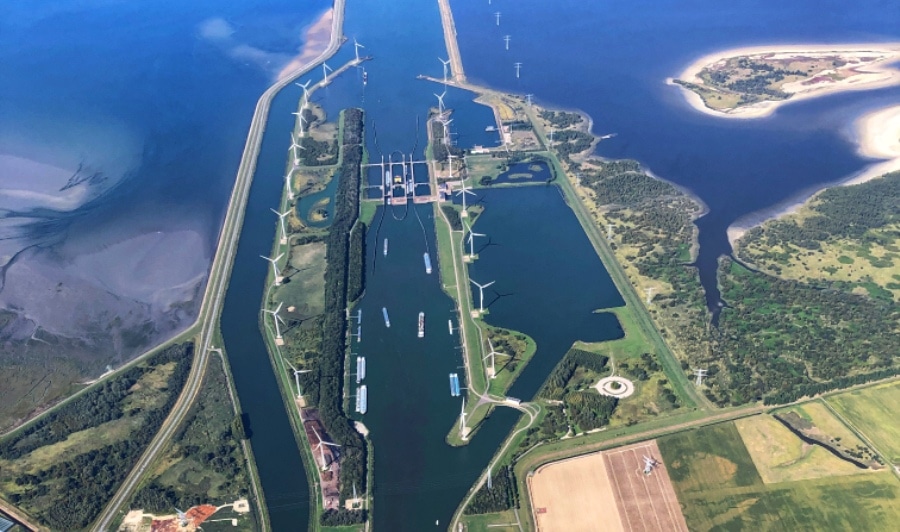 Coordinating flow and flight paths
Flying the skies and photographing the ground underneath their wings has been at BSF Swissphoto’s core since it was first established in Switzerland in 1930. The company took on its first aerial survey and photogrammetry flight in 1960 and steadily grew its business by offering multi-sensor solutions with millimeter accuracy.

With a record for successfully delivering on surveying projects near Schiphol and other challenging areas around Europe, BSF Swissphoto was in a strong position to respond to the aerial photo needs of the Information & Coordination Centre (ICC) of the Schiphol Region. The ICC represents about 60 government-affiliated organizations, including 47 municipalities, and works to coordinate and provide access to up-to-date aerial photographs and other remote sensing products on a routine basis. Since 2009, it has issued tenders to capture high-resolution photos of the 2800-sq-km Region that extends from Alkmaar in the north, Almere in the east and Zoetermeer in the south. Participating members use the detailed photos to update their large-scale topographic maps, for urban and environmental planning, for security and for monitoring land-use changes.

Depending on the number of ICC participants, the program’s total AOI can change year on year, but the delivery requirements are always the same: orthomosaics with a ground sample distance (GSD) of 4cm or less. In 2016, BSF Swissphoto received a two-year contract to survey one of three AOIs under the ICC’s Vertical Aerial Photo program. Proving its capabilities, it was then awarded a subsequent contract for the same 900-sq-km area for 2019 and 2020.

“We are skilled in developing well-crafted and realistic flight plans that not only enable us to be efficient in the air but also in processing the stacks of images we acquire,” says Beckmann. “Equally important is our ability to meet the exacting technical requirements. With Trimble’s Inpho® image processing software we have the tools we need to meet the orthophoto precision and the delivery timeline the project demands.”

Collecting the aerial component
For the 2019 campaign, BSF Swissphoto’s AOI included 17 ICC municipal territories in the northern part of Schiphol, each of which required its own seamless orthomosaic. In addition to the very high resolution specifications, the orthomosaic had to be precisely color-balanced –– no dark shadows or excessively bright spots –– geometrically accurate, completely clear with distinct contrast, and aesthetically pleasing.

The aerial campaign began in February in order to acquire images of bare trees and to ensure they capture as much ground detail as possible. Considering the restrictive and complicated air traffic regulations, BSF Swissphoto split the whole AOI into seven sub-areas, delineating smaller fly zones near the airport and larger sections further north. The smaller sections were carefully chosen because the team knew they’d collect a significant volume of photos and they wanted to ensure the orthophoto production would go as smoothly and efficiently as possible.

To coordinate with the flight plan and to achieve consistently high accuracy over such a wide area, BSF Swissphoto used a base station, GNSS receiver and differential GPS (DGPS) technology to establish control for each sub-area, and they set out a network of ground control points (GCPs). For the GCPs, teams used a combination of colored, physical targets and painted markers on hard surfaces at set intervals within each sub zone and measured the center points of each with a GNSS receiver. They set GCPs in groups of two, each placed close together for point redundancy, and laid out a total of 164 GCPs with a horizontal accuracy of better than 3 cm.

After setting control, BSF Swissphoto dispatched their flight crew to collect aerial imagery. Flying at altitudes of both 335 meters (1,100 feet) and 427 m (1,400 ft) at speeds between 120 to 155 km/h, they covered the entire AOI in 30 hours over six days. They flew 261 flight paths and collected 30,000 images with their large-format digital camera. The images had a 60 percent endlap and the average sidelap between the flying strips was about 30 percent.

“Flying at such low altitudes is risky because the slightest deviation––like movement from a sudden gust of wind––can impact our defined overlap or clarity in a photo,” says Beckmann. “We were fortunate to have good weather for the flights.”

Orchestrating the orthophotos
After downloading and processing the aerial images and aircraft trajectory data, Beckmann and colleagues imported them together with the GCPs into the MATCH-AT georeferencing module of Inpho to automatically triangulate the images. The software processed the 30,000 images in batches and automatically pinpointed 254,000 common features or tie points (TPs) with multiple connections across the images. The precisely surveyed GCPs were measured in MATCH-AT, and in a second quality control step, the team used MATCH-AT’s Stereo module to manually verify and measure all the GCPs in stereo. After that the imagery was precisely oriented automatically.

“The automatic triangulation and tie-point identification capabilities in Inpho are very good and give us the essential foundation for creating precise orthophotos and orthomosaics,” says Beckmann. “You can’t build an accurate result from an inaccurate base.”

After the final triangulation was done, the team downloaded an existing LiDAR-based digital terrain model (DTM) of the entire AOI and analyzed it for land-cover changes that needed to be corrected or updated. The DTM was then integrated into the Inpho software. With the Inpho OrthoMaster module, the software used the DTM to automatically orthorectify the individual images with a ground resolution of 4 cm. Switching to Inpho OrthoVista, the photogrammetry tool for creating seamless orthomosaics, each orthophoto was stitched together to create a 2D orthomosaic of the entire AOI. Experienced BSF Swissphoto operators then performed quality control checks on each orthomosaic and flagged any potential issues such as incorrect seam lines. They could then use editing tools such as the OrthoVista Seam Edit tool, in coordination with ancillary data like building outlines, to manually check the seam lines and ensure they didn’t intersect buildings or cross objects like bridges that would be distorted in the mosaic. Any imperfections were fixed to create seamless, color-balanced and geometrically correct orthomosaics of the 900-sq-km AOI.

“We’ve been using Inpho technology since 2005 and so far, we haven’t found any solution better than OrthoMaster and OrthoVista for creating ortho products,” says Beckmann.

After completing all the orthomosaics, BSF Swissphoto personnel then prepared the customized deliverables. Per the ICC’s requirements, they not only finalized all 17 orthomosaics, but for each city, they selected all the ortho tiles belonging to each city’s territory and formatted each as a TIFF file, enabling them to provide both the seamless mosaic and the corresponding individual tiles to each customer. Within 11 weeks of completing the aerial survey, each of the ICC cities had received their up-to-date orthomosaic for 2019.

“We wouldn’t have been able to process and transform 30,000 photos into real-world, color-balanced and seamless 2D orthomosaics in 11 short weeks without the automation and accuracy of the Inpho software and a strong team,” says Beckmann. “The clarity and detail these orthomosaics provide will be a valuable geospatial dataset for ICC participants.”

Indeed, with the routine procurement of airborne imagery, the ICC members are living proof of the benefits of one of the organization’s mottos: “Acquire aerial photos once, use them multiple times.”

“The need for up-to-date, fit for purpose geo-information has steadily grown in recent years,” says Leon Hendriks, the ICC’s program manager. “Historically, this data hasn’t been easy to obtain for individual organizations in the Schiphol Region because of their proximity to the airport and access restrictions. Since 2009, the ICC has been able to coordinate one aerial campaign to serve multiple users within the Region. With these brilliant, accurate and data-rich orthophotos our members have the spatial intelligence to better plan for city and rural development, monitor their landscapes, respond to permitting requests and appeals and communicate to the public. It’s been a very successful program and one we plan to continue for the foreseeable future.”

That future has already begun. BSF Swissphoto took to the skies in mid-February to initiate the 2020 Vertical Aerial Photo campaign and will again be producing seamless orthomosaics for the participating ICC members in its AOI. Anchored by its smart approach to flying in combination with its image processing software, BSF Swissphoto may have the tailwind to land more airborne surveys in the future.