When mobile imaging technology was first introduced in The Netherlands, the city of Amsterdam immediately saw the benefits of using 360-degree geo-referenced imagery. The new technology gave a much better view of the state of the built environment than aerial imagery, not only through a different angle but also in higher detail.

For years, the Dutch Cadaster had commission a contractor to collect nationwide street-level imagery, and Amsterdam would license a portion for its own use. Over time, the city grew dissatisfied with the contractor´s working methods. “It seemed exploitive to grow a business by making governmental agencies pay for the same product over and over again with tax money,” said Ries Visser, Senior Advisor Basic Information for the City of Amsterdam. “Paying for the data collection with tax money is one thing, but charging for each use is excessive.”

Outsourcing to a contractor for the imagery also meant strict terms of use for Amsterdam, as well as limited flexibility in choosing when the data was captured. “We´d receive a timeslot for the next two months from the contractor. This meant that if the weather was bad during that time, it would show on the street level imagery, diminishing its usability.”

To gain independence while also taking over ownership of the imagery, Amsterdam decided to acquire an in-house mobile mapping system. After extensive market research, they chose the Trimble MX7 Mobile Mapping Imaging System, gaining a single integrated system that was easy to mount on a car for land use or on a boat for use on water.  The city also wanted an open system, so the street view imagery could be accessed by third-party vendors as well as single viewers.

Multiple applications enhances value
Having its own mobile mapping system enabled Amsterdam to capture street-view imagery anytime, anyplace and share it with any stakeholder inside the organization. This is important because many departments rely on the imagery for their daily work. Updating the imagery often is necessary as the city changes rapidly.

One of the most important applications is the management of public space, said Visser. “The street-level imagery shows us where things like traffic signs and building facades are and how often they change. Because we capture the imagery ourselves, we are able to monitor the state of the public space on a yearly basis. And it´s so detailed that you can do the work from your desk without leaving the office.”

In addition, the street-level imagery provides a clear view of new construction projects when assessing real property. The city archive finds the imagery especially valuable because it gives them a year-by-year overview of the entire city. Firefighters and ambulance drivers use the imagery for an overview of the surroundings before they arrive, enabling them to act faster and reduce response time.

Another way the MX7 is put to use is mounted on a boat to navigate Amsterdam’s famous canals. “This enables us to monitor the state of the embankments and be more responsive for any required maintenance work,” Visser said. “It is impossible to get this information from street level imagery; the angle from a boat is much better.”  The system is also mounted on a Port of Amsterdam boat to monitor the port.

Additionally, this data is used for law enforcement. People who live on a houseboat are required to pay taxes for their anchorage in the canals. Amsterdam is the only city in The Netherlands where an independent ground lease is paid for the terrain where a house or houseboat is located. Visser explains: “A tug-boat is used to sail all canals and locate all houseboats using the MX7. With the imagery, a separate agency from the city is able to ensure that all the houseboat owners receive a combined tax assessment that includes a payment for their anchorage.” Amsterdam has the highest concentration of houseboats in the whole country and counts over 3,000 anchorages. Although they have a street address (based on their location with respect to the nearest street address), their location may change over time.

There are also plans to use the MX7 for asset management of objects in public space, such as traffic signs and roadside fixtures. Creating a city model is another possible application, said Visser. “The imagery is used for point cloud creation, which will help to create a 3D city model.” 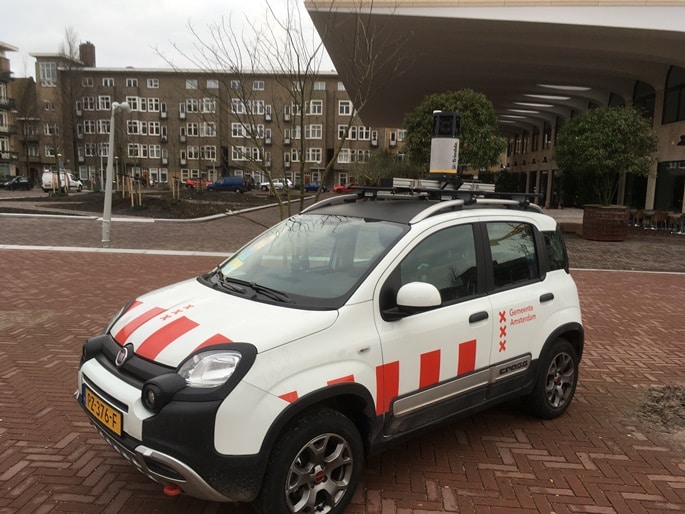 More updates per year
To capture the imagery, Amsterdam hired three drivers as part of a corporate social responsibility initiative subsidized by the city. This enabled the city to create employment as well as realize cost savings.

After the imagery is captured, it is processed in-house. “We´ve designed a production workflow with large processing capabilities due to the volume of data collected,” added Visser. “This guarantees a quick turnaround as well as data safety. Our network would be too slow for so much data. Using a separate environment enables us to process the imagery in a few hours and makes it impossible for anyone to hack the network.”

The city uses Trimble POSpac Mobile Mapping Suite and Trimble Business Center (TBC) Survey CAD software for the workflow. The POSpac Mobile Mapping software is used for georeferencing the imagery, whereas TBC helps deliver high-accuracy GNSS data. “After processing, the data is copied to a server and recognizable faces are automatically blurred. The imagery is published and shared with external users through a web application. “We have published all our street level imagery since 2004, along with maps and aerial imagery. All but the private information is accessible to the public,” Visser said. 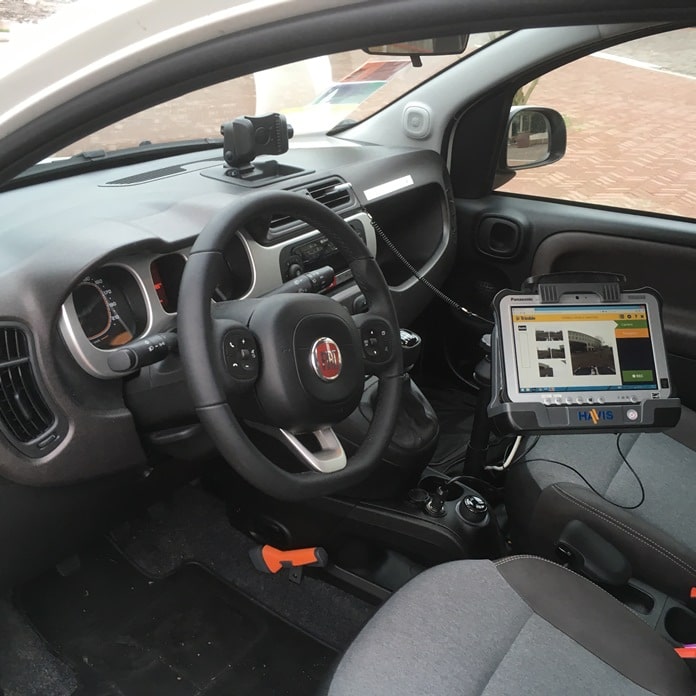 An open data approach
To further increase efficiency and ROI, the city maximizes its use of the MX7. Because there is a lot of money involved with street level imagery project tenders, a set of European directives are applicable. These are defined by the European Union and apply to all public contracts above a certain limit. “To avoid vendor lock-in and changing providers every two years, we chose an open source web viewer. The concept of open data is very important to the city of Amsterdam. The imagery is paid for with tax money and we believe citizens should have the right to view it. That´s why we chose an open data approach.”

The city of Amsterdam is a pioneer in the use of mobile mapping, and other Dutch cities have expressed interest in its use.  “No other city has the amount of experience that we have,” Visser said. When Amsterdam isn’t using the MX7, nearby suburban districts are now putting it to good use.