Mobile LiDAR technology was requested to provide a seamless 3D survey data set across the station’s rail infrastructure systems and to locate all visible ancillary features throughout the underground facility where GPS data isn’t available and do so without disrupting passenger train service. 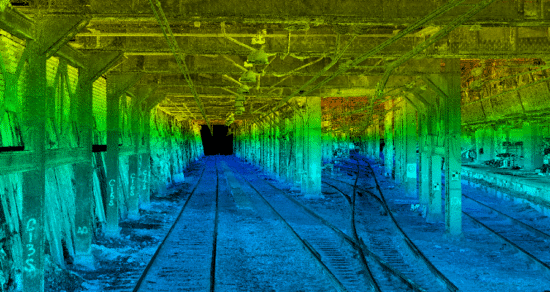 Amtrak’s NYPS is the main intercity railroad station located in Midtown Manhattan.  The station is located entirely underground beneath Madison Square Garden with its 21 tracks, 11 platforms and 7 connecting tunnels.  The project spans from the station side portals of the 2 Hudson River tunnels, through the station’s 21 tracks and 11 platforms, and to the station side portals of the 4 East River tunnels. The team of HNTB represented by Gordon Perry, RPLS, PLS, and Surveying Solutions, Inc. (SSI) represented by Jeff Bartlett, PLS, have been working together utilizing RIEGL mobile and terrestrial LiDAR technology for rail and highway endeavors for 7-plus years.  The success of this unique project is a testament to the partnership and commitment of these firms.

NYPS has challenged conventional surveying, terrestrial scanning, and early adopted mobile mapping technologies for years to produce a single continuous data set of the entire facility.  Absolute data accuracies of +/-0.04’ were Amtrak’s requirement for track infrastructure and station platform improvement projects. Surveying in the busiest transportation facility in the United States required a unique solution utilizing the most advanced surveying technologies and applications coupled with extensive communications with Amtrak to produce surveying and mobile mapping data for current and future needs of the facility.  The top priority was two-fold: 1st, safety of the workers and 2nd, no disruption or delays to passenger train service in and out of NYPS.

To address the challenge of working in a non-GNSS environment, extensive testing was done to validate mobile mapping LiDAR data acquisition procedures and theories. Data acquisition runs were simulated by acquiring GNSS data only at the beginning and ending of each test run.  Numerous tests runs were conducted to establish the maximum time the mobile mapping system could operate without GNSS data.  Each set of data acquired during the test runs were processed to validate the information and to ensure results were repeatable.  The results of the testing established that the mobile LiDAR system could operate for a little over an hour with a short GNSS static session at the beginning and ending of each data acquisition run. 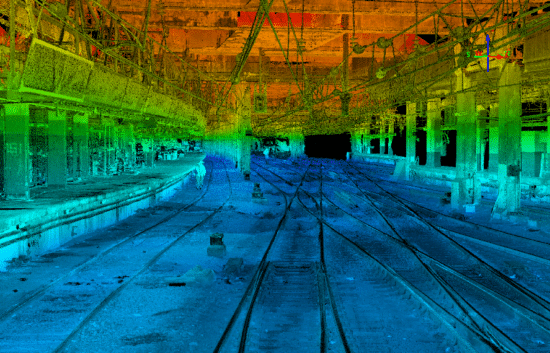 Once a time frame for data acquisition without GNSS signal was developed, a plan was put in place for the mobile LiDAR hi-rail vehicle to resurface every hour.  Through track charts and other information provided by Amtrak, every mainline, crossover, yard and siding track length was developed. Once the total number of track miles and the individual track lengths were developed, the tracks were divided into groups based on time.  A truck pad just a few blocks north of NYPS Amtrak’s Empire Line provided a launch site for the hi-rail vehicle and more importantly it was above ground providing a view to the GNSS constellation.

By having the time line for working without GNSS signal, an access point, and the tracks lengths, a time table was developed for the track movements needed for the mobile LiDAR data acquisition phase of the project.  The time table allotted 7 ½ minutes for the hi-rail to travel through the Empire tunnel to NYPS, 45 minutes of scanning a track grouping within NYPS, followed by 7 ½ minutes back through the Empire tunnel to resurface and collect GNSS data.

A Site Specific Work Plan (SSWP) was developed and submitted to Amtrak outlining the intermediate survey control network needs, the setting and locating of the scan targets, and the on-track hi-railing operations.  All survey field personnel completed Amtrak’s Roadway Worker Training safety course and began conventional survey traverses and differential leveling operations, under the direction of Amtrak flagman to establish the survey control network values.  As insurance, terrestrial scanning operations were conducted throughout NYPS both on the station platforms and at track level to define surface planes to be used to calibrate and validate the mobile LiDAR data. 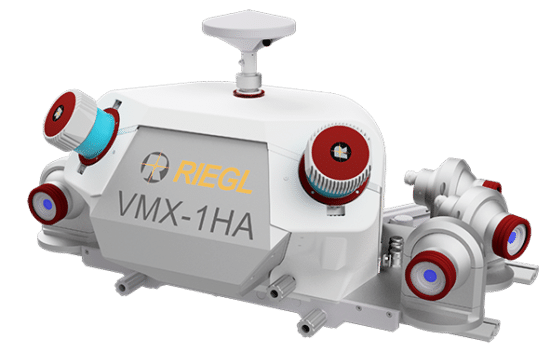 In just 7 days with three survey crews working the overnight shifts and one crew working a daytime shift the survey control network, the setting and locating scan targets, and the terrestrial scanning operations were completed.  Daily project briefings and continuous communication with Amtrak paid dividends. throughout all field operations.

During the conventional survey operations, Amtrak called upon the survey team leadership to change the SSWP for the mobile LiDAR hi-rail operations from the original agreed upon schedule of 4 hours of track time for 4 days or nights to one 16-hour day. With the project schedule covering a holiday, Amtrak wanted to take advantage of the reduced train schedule for the Martin Luther King holiday and proposed running the hi-rail mobile LiDAR operations from 7 a.m. to 11 p.m.  The plan included using an additional Amtrak Dispatcher to assist with the track movements of mobile LiDAR hi-rail with the scheduled revenue train traffic and provide an additional team member to review, report, and monitor track coverage hourly between the dispatcher and the Amtrak hi-rail pilot to ensure every track was independently scanned.

The hi-rail mobile LiDAR operations began in the very early morning hours of the Martin Luther King holiday with the system and the hi-rail vehicle being prepared for the 16 hours of operations.  At 7 a.m. the vehicle began its first trip through the Empire tunnel to NYPS to begin the scanning operations and resurfaced an hour later.  Throughout the day and into the evening, the round trip from the mouth of the Empire tunnel to NYPS and back continued until the scanning operations were successfully completed at 11 p.m. The project started in mid-January of 2018. The first data set, comprised of all the track infrastructure extracted at 3-foot intervals, along with all the station platforms was delivered by mid-May of 2018.  Since that first delivery, the 3D data set has been used for Building Information Modeling (BIM) along the platforms, construction planning and sequencing, and is currently being used to build track replacement components (switches, frogs, and crossovers).