The world’s 11th busiest airport, the second largest in terms of hub connectivity, and the main international airport of the Netherlands, Amsterdam Airport Schiphol facilitates the movement of passengers and cargo throughout the Netherlands and the rest of Europe.

The airport originally implemented GIS in 1985. Currently, ArcGIS Enterprise is a core technology in its business processes. In 2017, Schiphol Airport began a capital improvement program, scheduled to last for several years, that involves a major renovation of existing facilities and the construction of new ones. To take advantage of the numerous digital assets created for the capital improvement program, Schiphol Airport built a digital asset twin of the airport.

“The airport’s digital asset twin provides the opportunity to run simulations on potential operational failures throughout the entire complex, which saves us both time and money,” according to Kees van ’t Hoog, head of the Development Operations team at Schiphol Airport.

CDE collects and processes data from remote sensors at the airport that are used in predictive maintenance. Within the 7,000-acre complex, the airport tracks and maintains more than 80,000 assets—both indoor and outdoor—from networks, runways, and lighting systems to information booths and fire extinguishers.

Schiphol’s contractors provide construction data in Industry Foundation Classes (IFC) format, a platform-neutral, open file format for standardizing data that is used for BIM. Every detail of a building—geometric and nongeometric design elements as well as construction information—is captured in the BIM. This information-rich model is used for analyzing design options and creating visualizations.

BIM data is processed using the ArcGIS Data Interoperability extension, which is an integrated spatial ETL (extract, transform, and load) toolset that runs within the geoprocessing framework of Safe Software’s FME technology. Through this processing, the BIM data is converted to scene layers that are able to be viewed with the ArcGIS API for JavaScript. Web scene layers are cached web layers optimized for displaying large volumes of 3D data in a browser.

The 3D Schiphol Urban View is a web scene, generated through this process, that gives managers, technicians, contractors, and other stakeholders a detailed view of the current status of construction. The web scene also functions as a dashboard for the asset management process. As part of Schiphol’s CDE, it can use attribute data from other systems and display real time asset data. In the future, Schiphol’s Development Operations team would like to create historic and planned construction views so that stakeholders can see the airport’s entire development process.

The facility incorporates smart components, capable of interacting with one another and reporting operational status in real-time so that a change in one component can affect and be detected by other components. Automated passenger and freight systems at the airport, such as escalators, conveyor belts, and ticketing machines, are monitored by an asset control signaling and monitoring (ACSM) implementation within Schiphol’s supervisory control and data acquisition (SCADA) system. Together, these systems continually check the status of the multitude of servomotors, circuit boards, and mechanical devices that comprise these systems, while maintaining their maintenance history and monitoring the systems’ programmable logic controllers. Schiphol also uses IBM Maximo asset management software for asset registration and maintenance.

“The ACSM lets us monitor and manage all of the assets comprising these systems in real time from a dashboard,” said van ’t Hoog. “So if one of the components that make up these systems, such as a belt or motor, is not running correctly, we can turn the equipment off, automatically produce a work order, and assign a maintenance crew to immediately repair it.”

Schiphol has introduced Veovo’s BlipTrack technology as its indoor traffic monitoring system. BlipTrack sensors detect a passenger’s wireless device, and its unique ID is time-stamped and encrypted. As the device passes by multiple sensors, the system measures travel times and movement patterns. It provides both real-time and historic information about queue times, occupancy numbers, and flow patterns to airport management, which helps maintain a safe and secure environment.

“As the digital twin of Schiphol Airport continues to develop, we look forward to making greater use of [ArcGIS] GeoEvent Server to analyze our streaming sensor data,” concluded van ’t Hoog. “For example, because it is designed to process and analyze large datasets in real time, it could be very beneficial in enhancing our bird control application.”

By Jim Baumann, a longtime employee at Esri.
He has written articles on GIS technology and the computer graphics industry for more than 30 years. 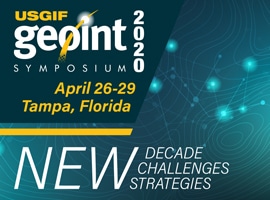