‘New Space’ pioneer Earth-i released the first video taken by VividX2, the technology prototype for its Vivid-i constellation. Launched on 12 January 2018, VividX2 is the world’s first commercial satellite able to provide full-colour video of life on earth. Weighing 100kg and measuring approximately 1 cubic metre, VividX2 is orbiting at 505km above the Earth and travelling at approximately 7km per second.

At the heart of the satellite is an Ultra High Definition (UHD) camera that captures high-resolution images for any location on Earth – and also films up to two minutes of video at a time as it passes over each target location. The newly released video footage was taken as VividX2 passed over a range of targeted locations under its sun-synchronous polar orbit. The clips show videos of numerous different locations across the globe, and some of the intriguing new insights that can be quickly derived from the video. These first sequences represent just a fraction of the data already collected by VividX2 and demonstrate Earth-i’s ability to deliver an unprecedented level of detail in full motion video, whilst also extracting still imagery to meet an ever-wider range of needs.

Richard Blain, CEO of Earth-i, said: “Commercial colour video from space represents a major breakthrough for our industry and a world first. This initial footage shows what is now possible – with more videos being acquired every day. The depth and quality of data we can now acquire takes Earth Observation-based big data analytics to a new level. The way we capture video allows for a broader range of contextual insights to be derived than is possible with traditional still imagery. Furthermore, processing techniques such as image stacking, can be applied to high frame rate video to increase effective resolution to levels as good as 60cm for still and video imagery. With the rich data we are now getting from VividX2, we are improving and developing advanced data analytics, new capabilities and insights from intelligent platforms, including the use of computer vision and machine learning.”

Earth-i is at the forefront of an era known as New Space which is being driven by commercial and Governmental organisations that want to use high-quality, timely images and video from space to improve investment and trading decisions, monitor and track their assets more cost-effectively, track changes or activities in critical locations, and predict future events with more certainty.

Welcoming the news, Graham Turnock, Chief Executive of the UK Space Agency said: “The UK has a long history of innovation and is now demonstrating the world’s first commercial satellite that can capture full colour video of Earth from space. With applications ranging from defence to disaster response, it is a great example of the strength of the UK space sector which we continue to support as part of the Government’s Industrial Strategy.” 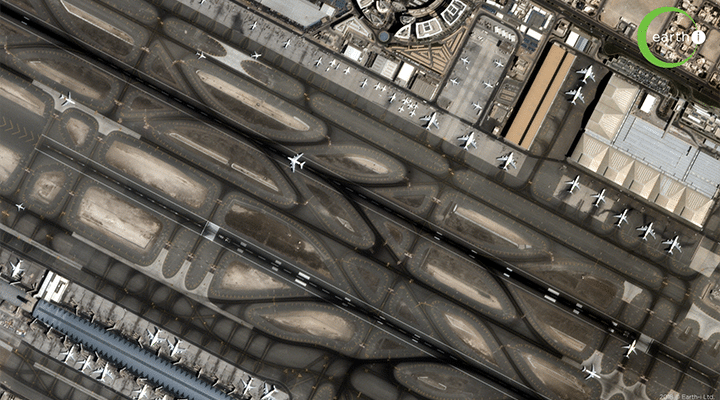 The current VividX2 mission is the product of a unique collaboration between Earth-i, the Ministry of Defence, Defence Science and Technology Laboratories (DSTL) and Surrey Satellite Technology Ltd (SSTL), all of the UK.

“Successful acquisition of the satellite’s first colour video from space is a pivotal moment in the development and deployment of this new technology, and work has already begun on the manufacture of the next batch of five production satellites for Earth-i’s Vivid-i constellation whilst they develop new applications from a stream of video data from VividX2,” said Sarah Parker, Managing Director of SSTL.

Earth-i is also investing heavily in its big data analytics systems to enable easy acquisition and analysis of imagery, and the use of advanced algorithms and machine learning to extract further value from the unique data gathered by its constellation.

About EARTH-i
Earth-i currently provides satellite imagery, data analysis and insights services from a range of Earth Observation (EO) satellites, including the DMC3 Constellation of three very high-resolution optical satellites and the KOMPSAT series of satellites, in addition to its own satellite VividX2 and the Vivid-i Constellation.  It has a wide range of customers globally including National and Local Governments and a multitude of specialist geospatial companies and other commercial organisations.

The launch of its own satellite constellation, Vivid-i, is a natural evolution of Earth-i’s existing and well-regarded image and EO analytics business and will enable it to meet the rapidly growing demand for high-resolution EO data, whilst pioneering high-frame rate image acquisition, ultra-high-definition colour video, and very high frequency re-visits. Earth-i is headquartered in Surrey, UK, on Europe’s largest academic space campus near to many other UK space-related companies including Surrey Satellite Technology Ltd. (SSTL).