Both products were designed for data-intensive applications and are now running on the Android® operating system. 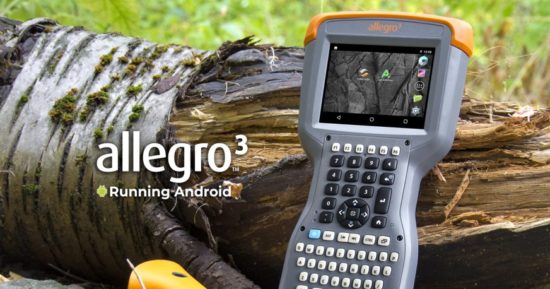 The Allegro 3 is the first rugged, mobile handheld computer from Juniper Systems™ to utilise the Android operating system. This third-generation product builds upon the successful formula that Juniper developed and refined in earlier versions of this mobile computer series.

‘It has all of the features you love, now on an upgraded platform’, said Mr Jeff Delatore, Juniper Systems’ product manager for Allegro and Archer. ‘It’s still rugged. It still fits comfortably in your hand. Fans of the Allegro will be really happy because it’s faster now and runs on an operating system that’s beginning to modernise the data collection industry’.

Other features include an ergonomic design that lessens hand and arm fatigue; a high-visibility capacitive display; and a backlit alphanumeric QWERTY keyboard, all carried over from the Allegro 2. The computer supports programs in 5 languages, including English, German, and French.

‘If it’s not broken, don’t fix it. It’s hard to break computers this rugged so we upgraded them instead’, said Juniper Systems’ CEO Mr. DeVon Labrum.

‘We gave pocket-sized data collection a serious upgrade’, said Mr Delatore. ‘It’s the same beloved Archer – but it processes data faster and more efficiently while running on an operating system most people have on their mobile’.

‘Juniper Systems’ core business is rugged data collection devices, and both the Allegro 3 and Archer 3 build atop a quarter century of experience to give our customers the best data collectors yet’, Mr. Bowe said.

The Android 7 ‘Nougat’ OS ensures faster data collection, greater speed, and stability on both rugged devices. Users will see programs and files load more quickly and will experience faster data transfers – all designed to expedite work in the field.

An intelligent lithium-ion battery, optimised for cold weather, powers both the Allegro 3 and Archer 3, and provides operating time of 20 hours on a single charge. The battery is easily changeable in the field. With 2 GB of RAM and 16 GB of flash storage, there is plenty of data storage capacity.

Wireless capability on both products includes 4G LTE, extended-range Wi-Fi®, and Smart Ready Bluetooth® with a range of greater than 30 metres (100 feet).

Both the Allegro 3 and Archer 3 rugged handheld computers are now available globally.