Most passengers sailing across oceans are often unaware of the herculean labour to build and maintain a cruise ship.
3D modelling and Building Information Modelling (BIM) generated with laser scanning have eased most titanic tasks by providing a detailed digital blueprint of a vessel, increasing productivity during navigation, easing retrofit and improving maintenance.

Time is money, especially in the shipping and maritime industries. Enhancing productivity while repairing and retrofitting large vessels is crucial as stopping commercial operations is a total financial loss for ship-owners. To minimise time spent in the dock, NautiSCAN3D, a company specialised in 3D modelling and measurements, surveyed a 288-metre-long passenger ship. This survey helped architects to check for production clashes and to plan retrofit of a scrubber system.

Scrubber systems are a diverse group of air pollution control devices. The scrubber system surveyed by NautiSCAN3D consisted of a steel tower on the ship funnel where sea water is injected to clean exhaust gas from Sulphur Oxides (SOx) and nitrogen oxides (NOx). This system helps shipping companies to be compliant with the International Convention for the Prevention of Pollution from Ships (MARPOL) established by the International Maritime Organisation (IMO). 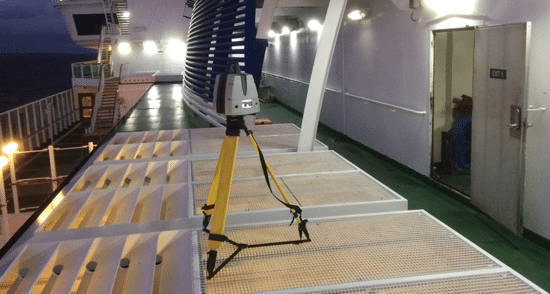 All hands on deck
Laser scanning collects all dimensional data to create 2D drawings, 3D models and BIM models. Elevations, sections and floor plans can all be converted into 3D models, 2D drawings or BIM-compatible formats to enhance the productivity of any retrofit work, such as adding new parts or replacing Heating, Ventilating and Air Conditioning (HVAC) equipment.

In association with Damen Shiprepair Brest and Sofresid Engineering Brest, NautiSCAN3D surveyed the passenger ship to prepare the studies for replacing the scrubber of the ship. Using a Leica P30 ScanStation, the survey captured the data of seven decks, the engine room compartment and the 30-metre funnel casing of the cruise ship.

The team acquired the data in international waters between England and the Portuguese island of Madeira. Despite strong winds and waves of the Bay of Biscay, 54 scans were collected in approximately five hours. Scans were processed, registered and checked for quality control in almost two days.

“Accuracy and speed of data acquisition were some major factors that drove us to acquire a Leica Geosystems ScanStation. The equipment meets our needs, and quality of the technical support is very appreciable. The ScanStation is very intuitive and simple to use – we haven’t experienced any issues,” said Henri Patou, manager at NautiSCAN3D.

Point cloud for plant
Laser scanning helped to create a model for the disassembly of the old scrubber system, the assembly of the new system, and a detailed 3D model was created in a Plant Design Management System (PDMS) to avoid any interaction during fitting. All data collected has been registered in Leica Cyclone and as-built point cloud data was manipulated in Leica CloudWorx for PDMS plug-in.

The virtual site within CloudWorx for PDMS helped the team to anticipate any interaction between parts during the next dry dock and assess the potential construction and operational impacts of the new equipment. Experts created the as-built model, checked the proposed design against the existing conditions, and performed critical construction and fabrication quality analysis, all directly within CloudWorx for PDMS.

“This way of working during navigation, without stopping the ship, saves precious time to work on the engineering part in advance, avoid surprises during the technical stop in the yard, and anticipates all clashes for the operation. With the new systems installed smoothly on board, this project was a success,” said Patou. 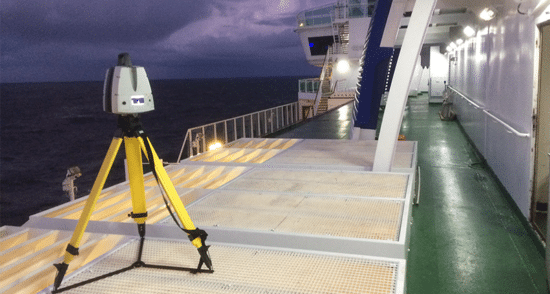 An ocean of possibilities
Laser scanning offers multiple applications for the design, build and retrofit of any vessel. The capture of environments in 3D allows experts to detect any deficiencies in an accurate and safe way. Beyond retrofitting, BIM models allow professionals to collaborate in real time, accessing from large scale to detailed area, to meet the pressing logistics offshore and onshore.

With the power and knowledge to leverage this technology, NautiSCAN3D can offer services in the maritime sector and the naval industry intervening at various stages of the lifespan of a ship.
Laser scanning allows them to measure with millimetre precision the geometry of parts, such as moulds, demoulded parts, primary forms, and appendages to:

The quest for increased productivity pushes the boundaries of technology. Mirroring the reality in 3D and CAD environments has revolutionised productivity for architects, engineers, plant managers and other professionals who now can plan, build, maintain and renew any structures with unforeseen speed, precision and accuracy.