Prior to 2016, the busy Port of New Orleans (Port NOLA) had “No enterprise GIS, no GIS software, and no dedicated GIS staff,” according to Maggie Cloos, Port NOLA GIS Manager. “We then got a grant for port security from the Federal Emergency Management Agency (FEMA), secured GIS software, and plans were formed to convert disparate legacy records, site plans, and institutional knowledge.”  And—most importantly—an initial phase of field asset mapping.

Cloos, who began her career at the port in construction projects administration, had completed some GIS courses as part of her graduate studies just as the port was exploring the development of its first enterprise GIS. Cloos chaired a steering committee to do needs analysis. She says the port fully recognized there are three crucial fundamentals a GIS must seek to be an effective tool for operations, planning, maintenance, security and disaster response: completeness, currency and accuracy.

Legacy Records
The state of the port’s infrastructure records prior to this initiative was silos of data in each department. This included legacy manual drawings (many that had been converted to CAD), engineering plans, site plans—but mostly institutional knowledge. “This is a big challenge for us when people retire or if we need information and someone is not available at the time,” said Cloos. “There are a lot of CAD drawings on certain facilities, but there were no comprehensive maps.”

“FEMA grants enabled us to acquire Esri GIS software.” said Cloos. “We worked with Esri’s professional services, who helped us set up the launch kit. But, in 2016 we really didn’t have anything to put into it yet. We really kicked off with mapping in early summer of 2017.” Cloos outlined priorities for asset mapping and records integration: “We had a lot of big site plans for large facilities like wharves, buildings, bridges. But many of the critical elements were small assets that require regular maintenance, and we did not have good locations for those. For instance, the many mooring bits where vessels tie off: these had to be collected with [GNSS]. Or they could be picked from aerial images—though they would still need to be ground-truthed.

To begin to visualize maintenance routines, the port sought to gather every crane rail, crane tie-down points, container gantry cranes, wharf decks, piles, things used in everyday operations, and disaster response. “Always in the back of our minds is the port security and domain awareness perspective,” said Cloos, “Especially with all the rail running through our port facilities. Say if there were a train derailment, we would need to know the critical utilities in our massive terminals that might be affected or compromised.”

A sudden influx of additional records from the Port’s recent acquisition of a shortline railroad exacerbated the challenge of integrating records into the new enterprise GIS. The New Orleans Public Belt Railroad Corporation (NOPB) was established in 1908. Effective February 2018, NOPB became a wholly owned subsidiary of the Port of New Orleans. NOPB is a Class III switching railroad with the primary mission of serving the Port of New Orleans and local industries. NOPB is a neutral carrier with direct connection to six Class I railroads: BNSF; CN; CSX; Kansas City Southern; Norfolk Southern; and Union Pacific. “We did our best to convert all the rail system property records they had; real estate they owned, records of track servitude, easements, things of that nature,” said Cloos. “We had crews walk and map every segment of track and mark all assets. Every whistle board, derail device—every small piece of infrastructure.”

The combined records of these two entities, among the world’s busiest ports and rail hubs, varied in completeness and currency. With the completeness of all the legacy records in question, any effort to integrate would require at a minimum substantial field verification, and in many cases new data acquisition via aerial image interpretation and GNSS field mapping. 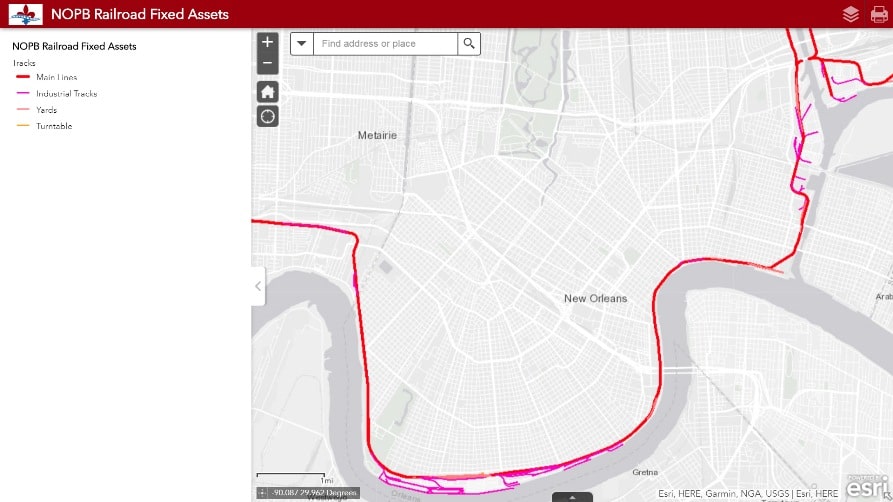 First Phase Mapping
Enlisted to help create this new updated and augmented enterprise GIS was the respected local consulting firm, Environmental Science Services, Inc. (Es²). Andrew Milanes, PE, GISP, is the vice president of Es². “The contract evolved,” said Milanes, “particularly with regards to the NOPB. When we would ask for existing records, we might only find paper maps that were typically only construction drawings, and not proper as-builts. Some of the newer records were CAD drawings, but those were few, and we would find some that would not agree with others done only years or months prior.” It became apparent to Es² and the port that new mapping and field data collection would be necessary to validate existing records, and to fill in substantial data gaps.

“We were able to do heads-up digitizing of much of the rail infrastructure, switches, etc., with digital orthophotos from various sources,” said Milanes, “but it was not possible to capture everything.” This is where the expertise and field equipment that Es² had would play a major role. Milanes added, “By the time we made the effort to try to digitize paper maps, geo-reference those and merge with features gathered from aerial photos, we would find a lot of uncertainty in the data. Field mapping was the only way we could be sure.” And for Es², that meant using the Trimble R2 GNSS receiver and antenna. Milanes explained that this system had already proven its flexibility as the GNSS component of mapping kits for a variety of projects.

Mapping Kit
The Trimble R2 rover was designed with asset mapping in mind but can often achieve similar precisions to that of its surveying cousins. Typically mounted on a 2 m surveyor’s pole (as Es²’s crews did) the ruggedized R2 is located over the mapper’s head to enable a clearer view of the sky.  Milanes said that in clear sky conditions, they were comfortably achieving 0.1’ (3 cm) horizontal precisions. “The cool thing is that using the same equipment, and software, and in the same amount of time we got high precision on everything—it is great to know we got it right the first time.”

“For collection of lower precision assets, to be added new to the GIS we will pair the R2 with an iPad or our Trimble T10 tablet and run Esri Collector,” said Milanes. “All of our field tablets have cellular connectivity, with SIM cards and built-in cell modems. We connect to our local VRS network for real-time corrections; this gets us the sub-foot precision we need.”

Es² performs a wide range of projects for the port, other public sector entities, and private sector clients as well. Different mapping tasks call for different precision thresholds. For higher precision mapping, Milanes likes to use Trimble Access™ (survey software on a tablet) to collect and analyze the GNSS observations. And for instances where GNSS might not work well—limited sky view under trees, or multipath from cranes and structures— Es² has a Trimble S5 robotic total station and will process data in the Trimble Business Center (TBC) surveying office software. 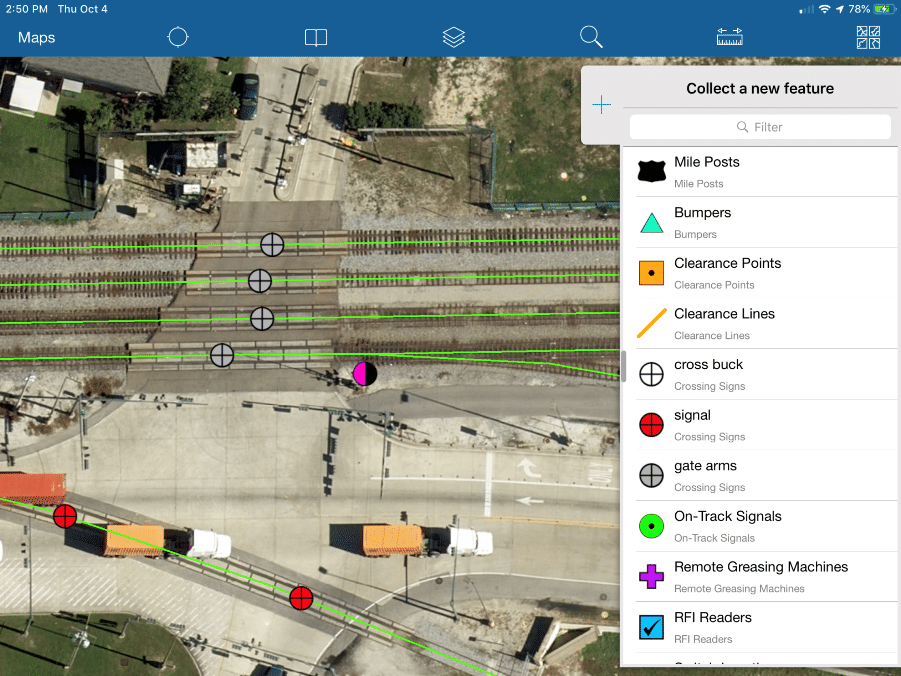 Results and Next Steps
Port NOLA has been quite pleased with this first mapping phase and has recently put out a request for proposal (RFP) for the next phase. The goal is to continue to convert existing records, ground-truth these via field mapping, and perform new mapping with high-precision GNSS paired with user-friendly mobile apps. A web portal then serves up these updated GIS datasets for the entire enterprise.

While there may be one or more mapping phases ahead, Cloos does not anticipate having dedicated staff for long-term ongoing mapping. “We’d like to move to where we can build capacity for our staff, train them how to fit this into existing workflows, support them with [GNSS] and mobile apps on tablets they can use in the course of their daily operations. We’ve already had great success with apps like Esri Survey123 and GNSS. The information can be entered, verified, and troubleshot right there in the field.”

Cloos offers a specific example of the success of these mapping activities: “Our wharves are supported over the water on piles, and there are access hatches to get to the substructure. That information used to live in site plans in white space; people had an idea what they might be looking for and where, but it was like trying to look for them from scratch each time or finding someone who might remember where the hatches were. Es² went out and put an accurate position on them all. Now, we can open the app and find them without having to pull out the old plans.”

This first GNSS field mapping phase for Port NOLA demonstrated that field mapping is a cost-effective alternative to legacy—often incomplete and inaccurate—records conversions. No matter how much legacy data is available, sometimes the only way to be sure of an asset is to field-locate, verify, and update.