The test simulated how this spacesuit would perform in a polar, Mars-like environment located atop the Grimsvötn Volcano on the Vatnajokull Glacier in Iceland, learning if the wearer would be able to move well and operate equipment. The field test was part of a research expedition conducted by the Iceland Space Agency. The team included NASA Coordinator and Rhode Island School of Design (RISD) professor Michael Lye, who led the team that designed the MS1, and doctoral students from the University of Iceland. The end game is to assist the space industry as they explore the viability of putting humans on Mars.

The RIEGL VZ-6000 was a perfect tool to demonstrate how a typical astronaut could handle, set-up and operate a LiDAR scanner while wearing the spacesuit. The scanner weighs approximately 32 pounds and can be operated manually with a 7-inch touchscreen, or remotely.  It comes with a heavy-weight tripod that can withstand high winds, and is adjustable so that it can be adapted to various terrains.

The scanner can operate at temperatures as low as -20ºC (-4ºF) to as high as +40ºC (104ºF). The expedition was called ISAGEVR1, which stands for Iceland Space Agency Glacial Expedition with Volcanic Research. The team included a group of researchers who volunteered to wear the suit and conduct simulated Martian research that included LiDAR scans. Limitations of the suit were discovered and are already informing future iterations of the MS1 Mars Analog spacesuit. 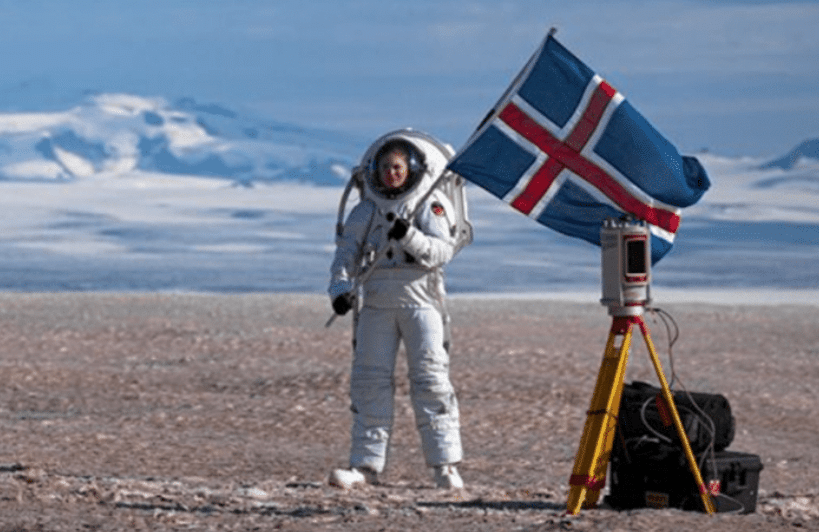 The MS1 Field Test Identified Adjustments and Additional Testing Needs
When asked about the challenges of working with the RIEGL laser scanners on Mars or the Moon, Jillian Kreider, TLS Specialist at RIEGL said, “Using the RIEGL LiDAR scanners to test what conditions would be like on the Moon or Mars are proving to be ideal tools to obtain quick and accurate measurements for scientific experiments, and to support the space missions.” She continued, “We were so happy to hear that our client, the University of Iceland, had agreed to loan their VZ-6000 to the experiment.”

The exercises in Iceland uncovered a few obstacles that need a bit more thought and testing. For instance, an astronaut with a rather bulky glove will want to find workarounds for easier set-up and operation of the scanner.  RIEGL has options for that. Another obstacle might be that the touch pad could prove difficult to operate with bulky gloves that do not have a built-in stylus. The workaround for this is finding a stylus that would be able to work with the glove or having a team member operate the system remotely while another team member physically moves the system. Daniel Leeb, Mission Director of ISA, called the field testing exercise a great success and said that the RIEGL scanner will continue to be used in future research for the space program and other environmental scientific tests.

One upcoming project is an interagency mission called CHILL-ICE that will be conducted by the ISA and the Euro Moon Mars Team in connection with the European Space Agency (ESA), and is scheduled for Spring 2021. The CHILL-ICE campaign will include acquisition of 3D data of the interior of a lava tube that will assist analog astronauts in their navigation of the tube and the successful deployment of an analog lunar habitat. Many other future projects are planned, including glacial melt monitoring and other environmental studies.

Field Training and Equipment Testing in Places Like Iceland is Essential for a Successful Space Mission
To pull off a successful mission in space, it is critical to train the astronauts and their support teams – both in the classroom and in simulated environments when possible. Equipment must be tested, re-tested, and then tested again to identify what works, what doesn’t, and how items can be modified and improved to be functional and achieve optimal results.

Field training and testing is ideally performed here on earth, in locations that have similar environments to those that astronauts could encounter on the Moon or Mars.  NASA, SpaceX, Blue Origin and other space exploration entities prepare for complex missions by field testing and training in places that may have extreme temperatures, wind, dust, humidity, zero gravity, difficult terrain, and/or energy fields that could interfere with equipment in a manner similar to conditions that would be encountered on other heavenly bodies.

There are a handful of places on planet earth that are called terrestrial analogs, because they mirror to some extent the climate and geological conditions found beyond our planet.  Iceland is one of a small number of areas in the world that offer many of the characteristics similar to those on the Moon and Mars.

In 1965 and 1967 the astronauts from the NASA Apollo mission came to Iceland to conduct geological research.  The Country has now been rediscovered by space agencies around the globe and is recognized for its ability to provide terrestrial analogs for testing, and an exciting destination for geologists and other science enthusiasts to visit.

Daniel Leeb, joined by a handful of like-minded individuals, recognized the need for an organization to help support space research, field testing and training. “The Iceland Space Agency was organized a few years ago to offer highly technical and logistical support to organizations from all over the world such as NASA, SpaceX, Blue Origin, and the ESA.” He continued, “In Iceland we have several terrestrial analogs that mirror conditions of both Mars and the Moon better than anywhere else in the world!”

In addition to the analog environment, ISA helps organizations access the many talented people there who are skilled with the guiding, transport, glaciers, volcanology, and geophysics necessary to safely conduct research at these remote sites. ISA can also procure exclusive access to equipment and vehicles that can take the teams to very remote, hard to reach locations.

Joining Mr. Leeb, a founding partner of the ISA is Gunnar Gudjonsson, a well-respected and experienced glacial guide based in Iceland. Gunnar provides missions with the practical knowledge of how to move teams and sensitive equipment across the icecaps and lava fields. Gunnar shares mission critical knowledge of how to navigate safely across these extreme environments; skills that one can’t always get by reading a book or studying in university.

There are exceptional resources from academia in Iceland, with many skilled scientists and equipment available. For the MS1 field test, it was through the generosity of the University of Iceland that the ISA mission was able to have access the RIEGL VZ-6000 and the PhD level researchers familiar with it’s operations and capabilities. “We are grateful to Magnús Tumi Guðmundsson, Professor of Geophysics at the University, who green-lighted these key contributions to the field test of the MS1 spacesuit. We hope to use the scanner on many collaborative projects in the future,” said Leeb.

Helga Kristín Torfadōttir, a PhD Candidate of Volcanology at the University of Iceland, was one of eight ISA team members who tested the MS1 spacesuit. Her geological field expertise made her an ideal candidate to operate and test the RIEGL VZ-6000 while wearing the spacesuit.