Today, virtual reality applications enable us to dive into the most distant worlds, comfortably and safely from the living room couch. 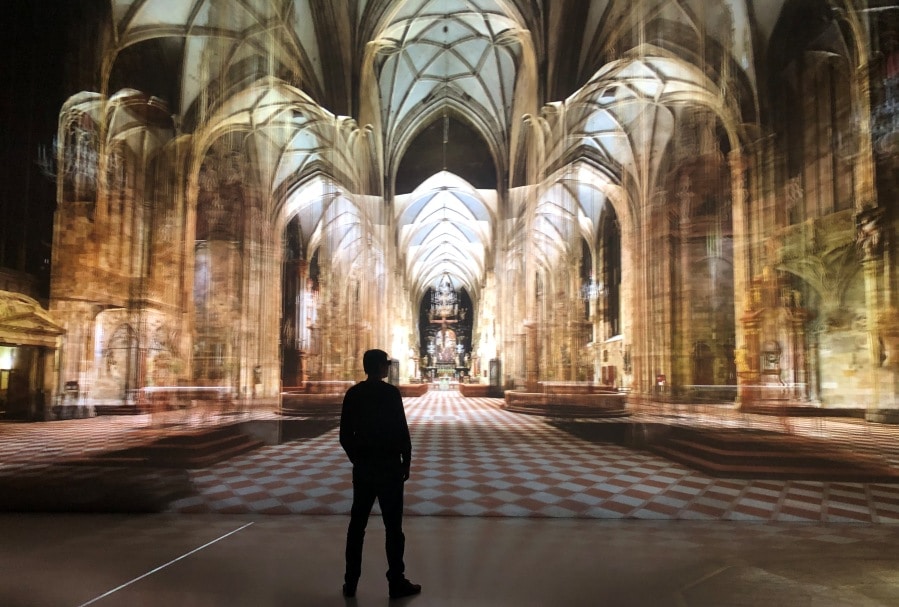 But what does the future look like?
Since 2009, the Ars Electronica Festival has repeatedly offered immersive experiences of a very special kind. This year, the Ars Electronica Center’s Deep Space 8K will make possible a virtual interactive 3D tour of Vienna’s St. Stephen’s Cathedral, based on a point cloud of 21 billion laser-points created by Austrian laser scanner manufacturer RIEGL.

At this year’s festival, The Translucent St. Stephen’s Cathedral allows visitors to fly through the real-time rendered point cloud and make hold on specified points. At these points, high-resolution 360° images of the entire set of more than 21 billion laser points fade in to present the full potential of the venerable building. At this unique level of detail, the laser points, which are based on RIEGL point cloud scans, correspond to a data volume of almost 400 gigabytes. This innovative approach offers an interactive journey through the translucent building in stereoscopic 8K. A truly spectacular experience!

Scan data acquisition was carried out within the framework of the already proven long-term cooperation of RIEGL Laser Measurement Systems with the Dombauhütte St. Stephan (St. Stephan Cathedral Construction Office). The goal of this project is an exact recording and documentation of the building structure of St. Stephen’s Cathedral by means of 3D laser scanning in order to create highly precise detailed plans from the point cloud data, as well as to generate views and sections that can be used by the Dombauhütte for construction analysis, damage documentation and simulation of historical construction stages.

Nikolaus Studnicka, RIEGL Business Division Manager Terrestrial Laser Scanning, explains, “In the typical terrestrial scanning workflow, one so-called panoramic scan after the other is recorded. The operator carries the scanner, which is mounted on a tripod, approximately 10 meters further in a minute cycle and starts the next scan by pressing a button. A full rotation of the scanner records an average of 22.5 million measurement points in 45 seconds. The spatial resolution at a distance of 10 meters is around 7 millimeters. The sophisticated RIEGL Waveform-LiDAR technology makes it possible to record hundreds of scans per day. For this scan project, five calibrated 45 megapixel images were taken per scan position. The image data allows for coloring the scan data and thus, a photo-realistic representation for further applications.“

In total, more than 1000 scan positions were recorded with a RIEGL VZ-400i laser scanner – in the church interior, in the catacombs, in the attic and at St. Stephen’s Square. The scans were automatically registered in the scanner and then adjusted to fifty precisely calibrated control points with an accuracy of six millimeters by means of the so-called “Block Adjustment”. The entire volume of scan and image data of slightly more than one terabyte was generated in only four surveying days in the years 2018 and 2019 with the laser scanner and in two surveying days with a total station.

When staff members of the Immersify project became aware of this gigantic resource, they wanted to use this potential for a virtual journey through Vienna’s landmark in stereoscopic 8K.

The Translucent St. Stephen’s Cathedral gives you the feeling of experiencing real-time and interactive content with such a high quality that actually cannot be rendered in real-time with current or near-future hardware. This was done by combining two types of content: A high-resolution point cloud that has been pre-rendered to 360° images from various perspectives by ScanLab Projects as well as a low-resolution point cloud that is being rendered in real-time. This never-before-seen view of Vienna’s St. Stephen’s Cathedral with multiple layers of transparency will now be experienceable at Ars Electronica’s Deep Space 8K in stereo.

The live premiere of the virtual journey will take place during the Ars Electronica Festival 2020 on September 12, 2020 at 4:00 p.m. CEST and will be available via live stream https://youtu.be/gbHq1k1LS5E.

Festival visitors will also be able to see a demonstration of the content in the Deep Space 8K on each day of the festival (September 9 – 13, 2020).

The unique insights into the layers of St. Stephen’s Cathedral were created as part of the Immersify Research & Development Project, which was funded by the EU Horizon 2020 program and dedicated to the development of the next generation of immersive media. Over a period of three years, the project partners – among them Ars Electronica Futurelab (Austria) – have created content for highly immersive environments using various techniques and developing tools for processing the produced data with a truly impressive result that’s something to be proud of!